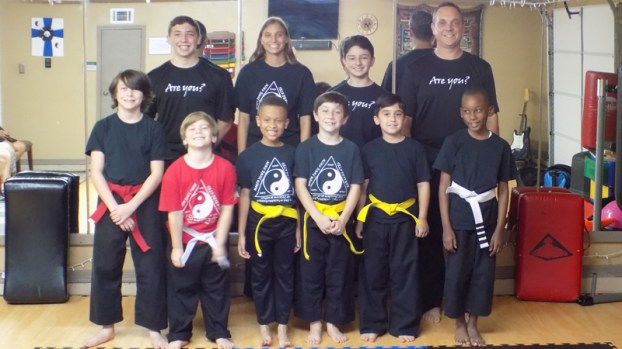 Moodo Jung Shin is Korean in origin and stands for spirit of martial arts, strengthening of the mind.

According to Rusty Aucoin, that message inspired him to start a small karate and street survival school in LaPlace named Moodo Jung Shin.

“We bring reality to the dojo, rather than Hollywood,” Rusty told me recently. “The physical fitness involved in it is the key. It gets (young people) off the couch, the PlayStations and out making friends.

“The biggest thing I stress is check your ego at the door. It’s not a place where you are better than the other person. The day you think you know everything is the day you need to move on. I look at it as you are always a student. The kids teach me stuff and they don’t realize it. The human body moves in different ways you don’t expect.”

Rusty began his involvement with martial arts in 1990, pursuing the various disciplines and advancing to the point that he has worked in a training aspect with three law enforcement departments.

Rusty said he is a certified MDTS instructor for law enforcement, which focuses on defensive tactics. His efforts with the Jefferson Parish Sheriff’s Office in 1996 and 1997 included work with the street crimes and drug intervention unit, handling drug raids in bad neighborhoods.

He said the real-world experience showed him what “really worked and what didn’t.”

That knowledge eventually led to a poor experience with a karate school for his son, which he said is indicative of an industry interested in tournaments, fake skills and belt ceremonies. Rusty derisively calls many karate schools “McDojos” that sell students and parents on skills that have little to no real world use.

He channeled his frustration into action, converting his two-car garage on Country Club Drive into a karate school.

“I want my students to feel confident. We talk about how to pay attention to things around you, situational awareness. It encompasses a lot for kids and is based on some traditional style that builds discipline. As they get older, they start getting into a little more self defense.”

He has a complete belt system lined up for younger students encouraged through program achievement. Exercise and defense take on a focus for older students.

Rusty said he hopes to expand his class beyond children and teenagers and into adult education.

The front of his class shirts say “Are you?” and the back says, “fit to survive.”

“There are bad people on almost every corner you see and I want to know my family is safe around me,” Rusty said. “If I can do something to make other people feel confident that they can actually survive an encounter, then I feel like I am doing something positive.

“Self-confidence is the biggest key. The confidence building and the stamina building are the key to surviving the encounter.”

To learn more about Moodo Jung Shin, call Rusty at 504-416-1340, email rustymoodojungshin@gmail.com or find the school on Facebook.