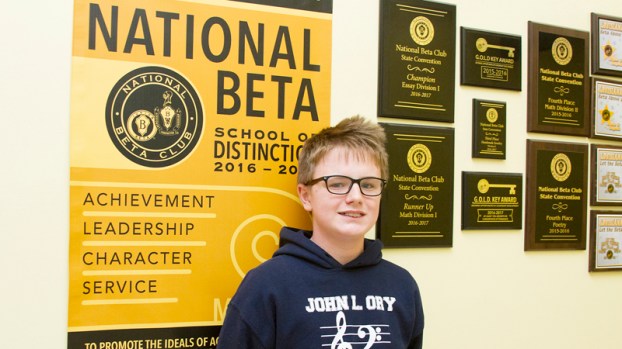 LAPLACE — It was evident Erik Mender Jr. had an aptitude for math by the time he was in fourth grade, but that talent didn’t shine until he was deemed a top performer on state and nationwide scales.

Last year, Erik was the top overall LEAP test scorer in sixth grade, and he was recognized by the St. John Parish School Board for attaining above an 800 in ELA and math.

“I don’t know what it is about math, but it’s always been my best subject, and I’ve always enjoyed doing it,” Erik said. “It all comes to me, and I understand it.”

Though his mother is a teacher at John L. Ory, Principal Monica Brown said Erik’s accomplishments are self-directed, not influenced by his parents.

Erik Mender Jr. is one of two students trusted to raise the American flag.

“Since I’ve met him, Erik tends to be at the top of the class,” Brown said. “A lot of what he does is intrinsically motivated. His mom is a teacher here, but he doesn’t use that as an excuse for anything. He’s independent. That, to me, is a life skill. He always strives to do more; always strives to be more.”

Erik’s responsible nature and five years of Boy Scouts experience make him one of only two students trusted to raise the John L. Ory flag each day, according to Brown.

When Brown sat in on Erik’s band class and heard him play trombone, she didn’t realize he had picked up the instrument for the first time in August.

“It didn’t sound like someone who had only been playing for the first nine weeks of school,” Brown said. “I can’t say I was completely surprised because Erik is someone who takes time to study and practice on his own.”

Erik said he made a decision in first grade to excel as a student, and he’s held steadfast to that goal.

He has been on the principal’s list every quarter for as long as he can remember, save for two instances where he made A-B honor roll.

Teachers have been impressed with Erik Mender Jr.’s ability to pick up and shine with his trombone skills.

“Since first grade, I knew I could be smart if I want to be smart,” Erik said. “I know who I want to be and what I need to do.”

Erik has dreams of becoming an aeronautics engineer for NASA.

“I’ve always been interested in stuff that flies,” Erik said. “I enjoy tinkering with things, like looking inside of phones and taking parts out of computers to see if everything is working.”

Erik said he is the person in class who people look to for help. During downtime, he can be found curled up in the corner of the room, a book spread across his lap.

His academic interests also extend to the arts through Book Club, art and music.

Wise, Schum each lean on experience to pitch School Board voters

LAPLACE — “People here are going to have a tough decision to make,” St. John the Baptist Parish School Board... read more