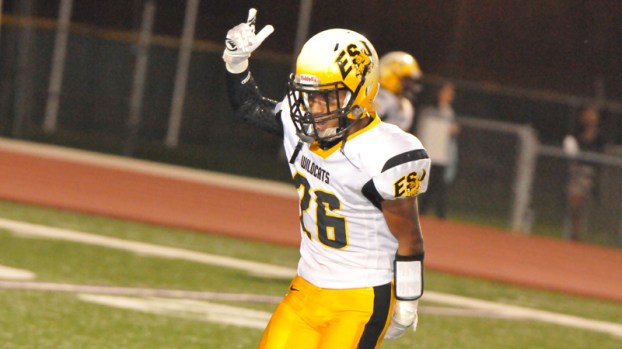 Despite its 2-5 record entering Friday night, East St. John has been regarded as a dangerous, improved team that was perhaps a few mistakes shy of, or a play or two away from, having completely reversed that win-loss mark.

When it came time to make one such decisive play Friday night at Hahnville, the Wildcats answered the call.

“This is a program changer, to come into a place like Hahnville and come out with the win,” said East St. John’s Brandon Brown, in his first year as the Wildcats’ head coach. “A question we’ve been asked all year, what are we gonna do to beat a team like Hahnville, a team like Destrehan, a team like Thibodaux, teams we haven’t beat in the last three years. This is a big win for our program.”

Brown said East St. John (3-5, 2-3) focused on limiting its mistakes all week, but one reared its head in the fourth quarter when a turnover gave Hahnville life, as ESJ led 14-0 through three quarters. Hahnville quarterback Jha’Quan Jackson scored on a keeper from 17 yards out with 9:59 left to play in the game, cutting ESJ’s lead in half.

But Shelby answered when he found Hoxie Brown to open up a 21-7 lead with 5:37 left to play.

“A good team (will score after a turnover) and Hahnville did exactly what they’re supposed to do,” Brown said. “I went to my offensive coordinator and said, ‘Hey coach, we have to get it back. We have to score.’ We did that. We knew something bad would happen at some point in the game, but we were able to respond.”

Shelby said with Hahnville (3-5, 1-3) playing aggressively to wipe out the run, his tight end had the chance to make a big play.

“They kept coming up field … they were sending ‘em,” Shelby said. “(Brown) said he was getting open, and I took him at his word.”

Shawn Sterling, No. 23, and Jarius Monroe, No. 1, helped the Wildcats top Hahnville.

The game was deadlocked in a scoreless tie for most of the first half, with each team playing suffocating defense. But ESJH struck first on Shelby’s 37-yard touchdown pass to an open Dontae Fleming with just under two minutes remaining in the first half to make it 6-0.

That momentum was fortified on Hahnville’s next possession when Kendrell Holmes intercepted a pass and took it the distance for a “pick six” return, putting ESJH ahead 14-0 after a two-point conversion.

“This win means a lot,” Shelby said. “We want to continue our season and finish with a bang. We know we need these wins to get to the playoffs … once we get everything right together, we’re gonna be a hard team to beat.”