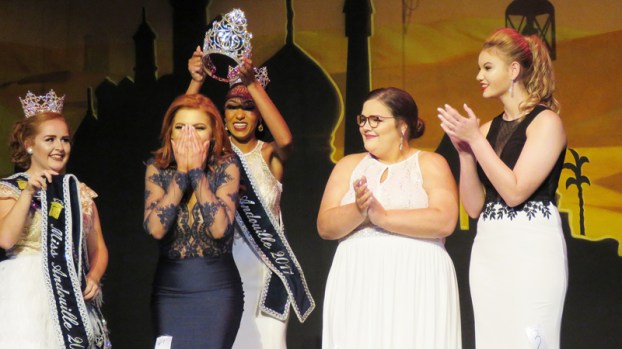 RESERVE — Mandi Lee Sweeney is a LaPlace native and River Parishes resident through and through.

She’s been a regular Andouille Festival patron since childhood and said the experiences and memories from those events are a big part of who she is today.

“I’ve always wanted to represent my hometown title, and now I can; I’m so excited,” a thrilled Sweeney told a reporter late Saturday night at St. John Theatre in Reserve.

She definitely had reason to celebrate as the newly crowned Andouille Pageant Queen.

The daughter of John and Michelle Sweeney of LaPlace said this hometown title holds a huge place in her heart and the opportunity to represent the community is amazing.

In the moments before her name was announced, Sweeney said she knew she had performed with all her heart and was praying for the best.

“I just can’t wait to show Louisiana what St. John Parish has to offer with our Andouille,” Sweeney said.

“We are the Andouille Capital of the World, and I plan to yell that from the rooftops.”

Sweeney said learning how kind all the girls were was the event’s best part.

“It was just an amazing experience to get to know them,” she said. “If any of them would have won, I would have been so happy for them.

The daughter of John and Pamela Necaise of LaPlace has attended the Andouille Festival with her friends and family since she was a little girl. Having looked up to the queens each year, now, Jenna is one of them, with a chance to serve as a role model for younger girls.

In the moments before her name was announced, Jenna said she prayed for the favor of winning but knew if it did not turn in her favor, it was all God’s plan for the best.

“I’m looking forward to traveling with my Miss Queen, walking around the festival and being that role model for younger girls,” Jenna said.

The winning queens will reign over the 2018 Andouille Festival Friday through Sunday and participate in various parish and community events as Ambassadors for St. John Parish.

The Miss Queen competes in the Louisiana Queen of Queens Pageant in February.

LAPLACE — The sidewalk connecting First United Methodist Church and Lutheran Church of the Galilean in LaPlace is evidence of... read more