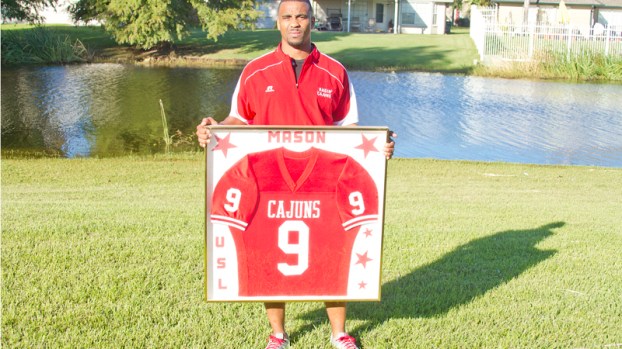 LAPLACE — LaPlace native Damon Mason’s football and coaching career has been a winding rollercoaster of thrilling highs and crushing lows.

The performance at strong safety earned him National Player of the Week, MVP for the state of Louisiana and a write-up in Sports Illustrated.

Mason’s No. 9 jersey was retired at the University of Southwestern Louisiana by the next semester of his senior year and now hangs in his father’s LaPlace home.

Mason was the state’s Defensive Player of the Year in his 1996 senior season at USL, the same year Kevin Faulk won the offensive honors while at LSU. He had 135 tackles that year, still atop the all-time list for tackles by a defensive back and the third-highest single-season total ever for a Cajun defender.

He finished his career with 243 tackles and six interceptions.

Damon Mason, seen on the Cajuns’s college football field, finished his senior season in college with 135 tackles, a school record by a defensive back.

After 22 years of waiting, Mason was one of six athletes inducted into the University Louisiana at Lafayette Athletic Hall of Fame Friday evening.

“I always thought the one last thing I was waiting for was for the Ragin’ Cajuns to induct me into the hall of fame,” Mason said.

“I’ve since changed my mind. My next goal is to be a coach there. I think that’s my finale.”

Part of his journey is sharing his story of adversity with the next generation.

Mason’s athletic journey began on the St. John Parish baseball scene. At age 10, he realized his affinity for football with the independently organized St. John Panthers.

Among a field of talent, Mason gained a reputation of being difficult to work with.

Adults told him he’d end up dead or in jail.

Damon Mason, shown above as a member of Orlando Predators, etched his name across record books in college and professional football.

“It was always ‘Damon is good, but he has a bad attitude,’” Mason said.

“Once I found out I could get an athletic scholarship, I felt like I had to get away to have a chance to prove myself.”

When Mason entered ninth grade, he transferred from East St. John to stay with his cousin in Destrehan and strapped on a garnet Fighting Wildcats jersey.

Still, Mason struggled with his temper.

DHS coach Chipper Simon gave him a tongue lashing, but Mason could hardly hear a word. Playing back in his head was a constant loop of, “a white coach won’t put up with attitude from a young black boy like you.”

Mason walked over to the bench, feeling defeated until Simon came to him in the midst of the Friday night hype and put an arm around him.

He explained the importance of representing their team and their school, and it was that moment Mason bought into the Fighting Wildcats program.

While Mason remembers that night as the turning point for his future success, Simon did not realize the magnitude of their exchange.

“We stay in regular contact, and Damon talks about that quite often, but from the time he was a freshman, I never saw him as a problem,” Simon said.

“You could see from the time he walked on that he was going to be a special player. He was a true team player in every sense of the word, and you never had to tell him anything twice.”

During Mason’s senior year, according to Simon, he transitioned from his defensive sweet spot to play running back because it was what DHS needed.

Despite this, Mason’s uphill battle persisted even after he earned a full athletic scholarship and subsequently lost it because of his poor academic performance.

His sister, Dayna Mason James, is immensely proud of his comeback.

James remembers the sullen drive to a Hattiesburg community college, where Mason regained his footing.

She recalls his valiant return to USL and the trials he went through after, which included missing out on the NFL and being cut from the Canadian Football League.

Since then, Mason has enjoyed a prolific career in the Arena Football League as a player and a coach.

In 13 years as a player, from 1998-2011, Mason became the all-time leading tackler in AFL history with 1,009 tackles in an offense-dominated league.

He was a part of two Arena Bowl champions while playing with Orlando, New Jersey, Las Vegas, Carolina, Grand Rapids, Austin, Utah and finally back in his home state with the New Orleans Voodoo.

He was still coaching part-time for the Jacksonville Sharks of the National Arena League this year when he got a call to become head coach of the Baton Rouge Red Sticks in the new NGL that will begin play next year.

RESERVE — After notching its first win of the season last week, Riverside Academy was hoping to put together a streak... read more