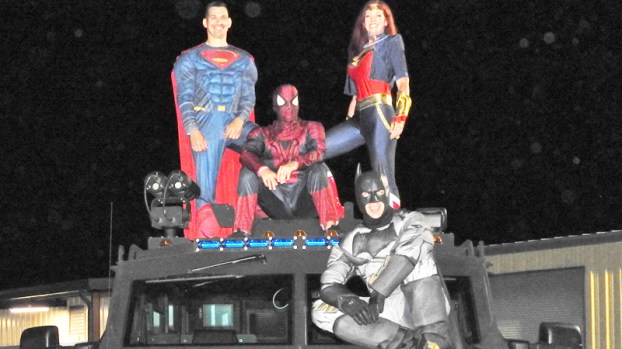 The SJSO's Super Man, Spider Man, Bat Man and Wonder Woman and the Bearcat were among the highlights of NOAC in St. John Parish Oct. 17, 2017. The Super Heroes are also known as Mike Dean, Daniel Materne, Brandon Barlow and Denise Bertrand.

Tregre: Take the night back from crime by joining others as a community this Tuesday

This Tuesday, Oct. 16, is National Night Out Against Crime. It’s that time of year when citizens and first responders come together for a few hours to get to know each other better.

It’s also a great time to show the criminals that our team is stronger than theirs. This year, we are currently at 36 parties registered parishwide.

NOAC was at one time held in August but the sweltering heat kept most citizens inside until it got almost dark, so now it’s held in October, when we hopefully will get cooler temperatures.

NOAC has been around since 1984, which simply started out as neighbors turning on their porch lights and sitting outside of their homes.

Citizens would have cookouts, live music and dancing, with visits by police officers, firefighters and paramedics with safety demonstrations, exhibits and projects for residents.

Members of SJSO will be out in full force as we fan out throughout St. John Parish to meet our residents we serve. In the past we had a group of officers dress up as Superheroes and other characters.

Unfortunately, they could not make every party (which is nearly impossible) and yes I heard the complaints. So SJSO decided to step up our game and this year there will be two sets of Superheroes.

We will start out on opposite sides of the parish, or whomever’s party starts first, and hopefully meet in the middle.

In other news, the SJSO Annual Senior Citizens Thanksgiving luncheon will be held Nov. 20 at Regala Gym.

We have been planning and preparing for some time. There will be bingo, door prizes and live music for all to enjoy. Lunch will be served at 11:15 a.m. We prepare for 400 attendees.

SJSO will also be out for Halloween making sure we maintain a presence to keep our kids safe. Members of SJSO will be distributing glow sticks for kids to wear so we can all see them better.

Finally some members of SJSO will be wearing pink shirts on Mondays during the month of October for breast cancer awareness. The funds collected will be donated to a local organization.

So whether you are attending a NOAC party or not just put your porch lights on this upcoming Tuesday night. This will let us know as we pass by that you are present in spirit and part of the team to keep St. John Parish safe!