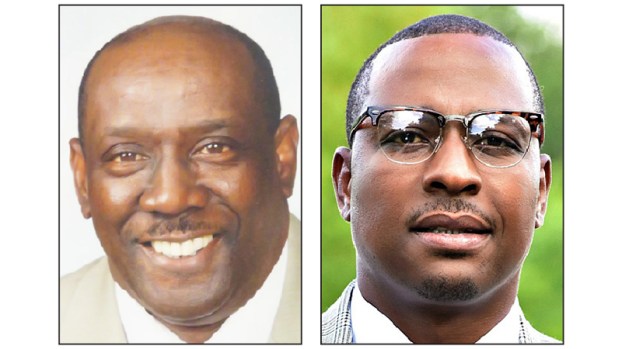 Incumbent Phillip Johnson, left, has been a School Board member since 2001. He is being challenged in District 7 by Corey Hutchinson.

LAPLACE — An experienced incumbent and a challenger focused on accessibility will contend for the District 7 seat in the Nov. 6 St. John the Baptist Parish School Board election.

Incumbent Phillip Johnson has been a School Board member since 2001, serving through years of changes in educational standards.

“I have a better feel for the people in District 7,” Johnson said.

“They know they can come to me and that I always vote in the best interest of the kids. I bring a clean slate without bias. I’m honest, trustworthy and will always get back with people if something is wrong.”

Others, including District 7 challenger Corey “Coreal” Hutchinson, have pointed out Johnson’s meeting attendance records have been less than consistent.

Johnson admits he has missed meetings due to health challenges but maintains he is ready to dive back in after recently receiving a clean bill of health.

“I look forward to my attendance record being improved,” Johnson said. “I missed a couple of meetings over a few months because I’m a diabetic, and I had a procedure done that didn’t go too well. Now I’m off my 12-step program and back in full swing.”

Accessibility of School Board operations to St. John Parish residents is one of the mainstays of Hutchinson’s campaign.

“The public has the right to know at all times the source of the money coming into the district and how the money is being spent,” Hutchinson said. “That’s transparency. One of my agendas is to be very accessible to the public. I will be at meetings and available to talk with the public. My opponent has not done that consistently.”

Hutchinson said he would like to implement a local hotline to direct community questions and feedback to his cell phone and send out newsletters of school board agendas.

In the vein of transparency, Hutchinson said his personal relationship with attorney Nghana Lewis Gauff does not impede his ability to work fairly within the School Board.

Gauff has represented entities that have been at odds with the School Board.

However, he said any member of the School Board, current or newly elected, should fully disclose any actual or possible conflicts of interest regarding any matter presented to the Board.

Hutchinson said drafting a policy regarding conflicts of interest would be one of his first priorities if one is not already in place.

He also plans to address the community at an upcoming LaPlace Chili’s Family Night, part of his Men of Our Community youth outreach organization.

Large campaign signs can be found around District 7 neighborhoods.

According to Hutchinson, schools could benefit from more after school programs, brother and sister programs and study hall opportunities.

“The greatest priority is still to educate these young kids,” Johnson said.

“I hope to see us come up with a better way to distribute our funds and make sure they have everything they need. Teachers don’t know exactly what they’re teaching without having the textbooks.”

According to Johnson, schools are stuck in transition between print and electronic formats, and East. St. John High has too many students to serve.

“We need to look at building another school because our high school is busting at the seams,” Johnson said.

In August, the St. John Parish School Board signed a contract for a new charter school to open in Reserve for the 2019-2020 academic year.

Hutchinson agrees that distribution of students creates gaps in achievement.

Hutchinson also notes students could benefit from individual laptops or tablets since textbooks are not being sent home.

Sixth grader Evan Brady is meek but well spoken, and though he “gets nervous easily,” he is a confident performer... read more