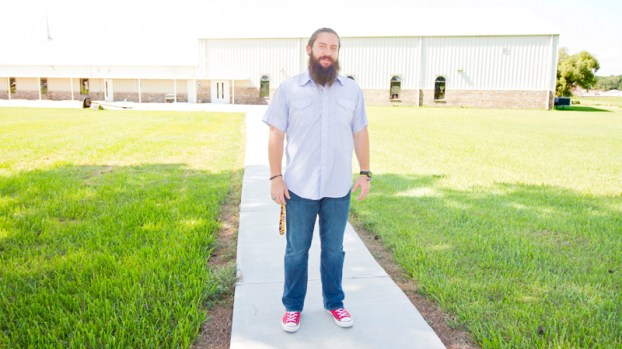 Pastor Jason Harris stands on the sidewalk linking First United Methodist Church and Lutheran Church of the Galilean in LaPlace.

LAPLACE — The sidewalk connecting First United Methodist Church and Lutheran Church of the Galilean in LaPlace is evidence of an inseparable bond.

The two churches were neighbors decades ago and seemed destined to be near each other, according to new pastor Jason Harris. Both churches relocated and ended up next door to each other on Bamboo Road and U.S. 51 by coincidence.

The Rev. Regina Hickman serviced First United Methodist and the Lutheran Church before she was appointed to two Methodist Churches in Eunice and Opelousas at the beginning of July.

Upholding Hickman’s precedent of unity, Harris delivers a Lutheran message at 9 a.m. Sunday mornings, walks across the sidewalk, and preaches at the Methodist church at 10:30 a.m.

Melynie Wright, a member of the Methodist church family since 2013, said grace and love are not limited to any single denomination.

“Communities always say they are about togetherness, but often show separation,” Wright said. “It’s very visible with the churches. The Baptists do this and the Catholics do that and the Methodists do this. At the end, there’s only one God and one faith.

“It’s a great thing where churches lead the way and say, ‘We’re going to show you how to be a collective voice.’ It’s an opportunity for people to find their faith without exclusivity, but open arms.”

As worship leader, Naylor leads the choir by selecting scripture-based hymns and songs to match the weekly lessons.

Naylor picked up piano lessons at 3 years old and started singing before he was old enough to realize what he was doing.

Harris reached out to him after seeing videos Paul Naylor posted of his son’s music.

Leading musical worship is a daunting job for a teenager busy with his First Baptist Church youth group and homeschool studies, but Naylor enjoys the spiritual growth.

“I’m very fortunate to have role models at both churches,” Naylor said. “I’m in a leadership position, but I’m looking up to others more than them following me.”

After receiving his diploma, Naylor hopes to attend college and pursue song writing.

Harris was accustomed to working with youth at his previous church in Shreveport. Above all, he believes in people finding God through their own path.

“If anyone comes to check us out, it doesn’t matter who they pick,” Harris said. “It matters that they come. Both congregations are welcoming and loving, and we tell people to try them out and see what feels right.”

The Lutheran Church of the Galilean sits off of U.S. 51 in LaPlace. Pastor Jason Harris said the church is built upon grace, love and mercy.

In the Lutheran church, the music is piano-based without drum and guitar additions, and Harris does not wear his robe. Lutheran communion includes wine for adults, while United Methodist uses only grape juice.

The delivery varies slightly, but Harris said both churches focus on grace, love, forgiveness and mercy.

Harris is interested in becoming involved in the community by offering before and after care services for children attending nearby Lake Pontchartrain Elementary.

A trunk-or-treat will be held from 5:30 to 7:30 p.m. Oct. 27 at the Lutheran Church, offering free refreshments, games and prizes for best costume and trunk decorations.

Admission is one canned good item to be donated to St. John Ministry of Care. Visit GalileanLutheran.com to register your car.

Each Wednesday from Nov. 28 to Dec. 19, the Methodist and Lutheran churches will host a Christmas program. Harris said a similar event would be held during Lent.

Tregre: Take the night back from crime by joining others as a community this Tuesday

This Tuesday, Oct. 16, is National Night Out Against Crime. It’s that time of year when citizens and first responders... read more