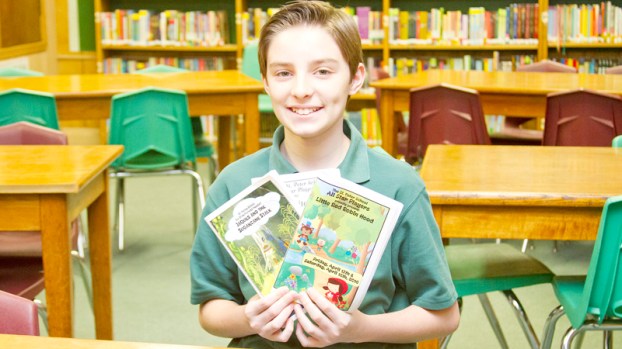 Sixth grader Evan Brady is meek but well spoken, and though he “gets nervous easily,” he is a confident performer in St. Peter Catholic School’s choir and drama programs.

Whether he’s singing at the Knights of Columbus senior citizen’s Christmas party, Lafreniere Park or at the Archdiocese of New Orleans Catholic Schools Arts and Music Festival, Evan exemplifies a passion for music.

His vocal talent started long before he joined choir in third grade. As a young child, he would sing around the house and pretend to be an actor performing under shining stage lights.

Evan finally made it to the stage when he joined St. Peter’s popular drama club.

Evan said each St. Peter play was given a special twist, whether it involved mixing fairy tales or inserting Cajun culture. In whatever role he played, he found a way to identify with his character.

“I like how when you’re acting, you get to express yourself on the stage and show what your personality is,” Evan said.

Evan thinks of himself as careful and conscientious, with a good-natured sense of humor.

Principal Marie Comeaux said Evan’s dedication to school sets him apart from his peers. She’ll never forget when Evan showed up for a Saturday math tutoring class before state testing, sick as a dog and pale as can be.

“He ended up having to go home because he was really sick, but I saw he had that determination and drive,” Comeaux said. “He’s a sweet kid who works very hard, and his grades reflect it.”

According to Comeaux, Evan is well liked by his peers and goes above and beyond to set a standard of excellence.

Evan abides by three rules for school success each day: “pay attention in class, care for other people and always keep up your grades.”

While social studies is his favorite subject, Evan dedicates attention to every class.

Last year, Evan was one of only two students in his grade nominated for student of the year. He’s a consistent honor roll student and a member of his school’s junior Beta Club.

At Beta Club District Day, held in the spring at Lutcher High School, Evan’s group advanced to the state competition in the “tower of power” competition.

“You have to make a tower with straws so they don’t fall,” Evan said. “We made sure to build a stable bottom and get it as tall as possible within the time limit they gave us.”

Evan’s parents, Greg and Tracy Brady of Garyville, are his role models, and he looks up to the seventh grade class as leaders of the school. When he gets to high school, Evan hopes to join the soccer team and grow his talent in choir and theater.