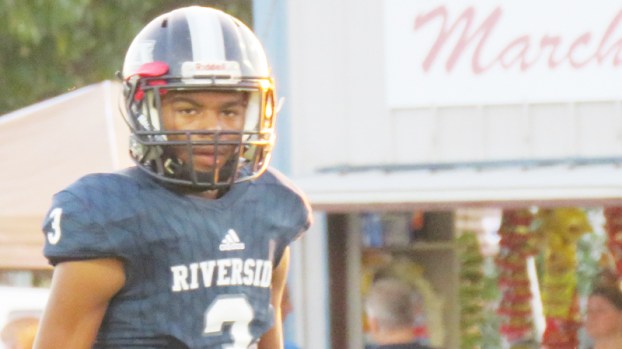 Gage Larvadain looks to the sideline during pregame warm-ups Friday in Reserve. The Rebels quarterback threw two first half touchdowns against Newman.

RESERVE — After notching its first win of the season last week, Riverside Academy was hoping to put together a streak this week against Newman.

But the Greenies were on a mission.

After letting an undefeated season slip away in an emotional loss to Country Day last week, the Newman Greenies set out to make a statement. That they did, taking a decisive 41-14 victory over the Rebels at Mickey Roussel Field in Reserve.

If this was a statement win, Greenies quarterback Martin Butcher provided the exclamation point. He completed 29 of 44 passes for 256 yards and four touchdowns, connecting with five different receivers. His favorite target on the night was Jamone Sutherland, who caught 11 passes for 177 yards and three touchdowns. John Charbonnet caught the fourth.

Liam Rowan ran for two scores and Will Hardie capped the scoring with a 35-yard field goal.

Greenies coach Nelson Stewart said it was only the third time in 20 years that a Newman team managed to defeat the Rebels on their own turf, giving him and his team cause for celebration.

“I think our effort came from our respect for Riverside Academy,” Stewart said. “We think they’re one of the better programs in Division III. It was an emotional week. I think you learn a lot about your players in those situations. I don’t know if this week happens if last week doesn’t happen. It was just a well-rounded effort. We worked really hard.”

It also came with four starters missing from the secondary, Stewart said.

But Butcher still had enough weapons to get the job done.

“We just wanted to come out and forget about what happened last week,” Butcher said. “That’s why I’m so happy right now. We wanted to come out, execute, focus on the little things. We spotted some weaknesses in their secondary and I’ve got two great receivers in Jamone and Murray (Calhoun). My O-line did great, gave me a lot of time in the pocket. We’ve got great running backs.

He led the Greenies on an opening drive that covered 65 yards on 12 plays, connecting with Sutherland on a 6-yard touchdown pass with 7:39 remaining in the first quarter.

Riverside answered, though, and quickly – on their third play from scrimmage. After moving from their own 40 to the Newman 46, Rebels quarterback Gage Larvadain found Tairyn Lockhart, who took the pass, cut inside and turned on his speed to the end zone.

Riverside coach Kevin Dizer said he was looking for improvement against Newman, but wasn’t sure his team delivered following their performance in defeat.

Newman came back with another clock-chewing drive, however, this time taking nine plays to go 80 yards. Rowan scored from the 1 with 2:19 remaining in the quarter to give the Greenies a 14-7 lead.

Newman kept that momentum when it recovered an onside kick at the Rebels 25. With 1:55 remaining in the first quarter, Butcher connected again with Sutherland to give Newman a 21-7 lead.

Riverside coach Kevin Dizer, who notched his first victory as head coach last week, said his offense did show some flashes of brilliance. But the Rebels only had the ball for 41 plays, finishing with 9 first downs, compared to Newman’s 26.

“We got beat,” Dizer said. “We didn’t play well. We got beat. That’s it. I’d like to think (we’re getting better), but it didn’t reflect tonight. Boo hoo. We ain’t going to cry about it. We’re moving on.”