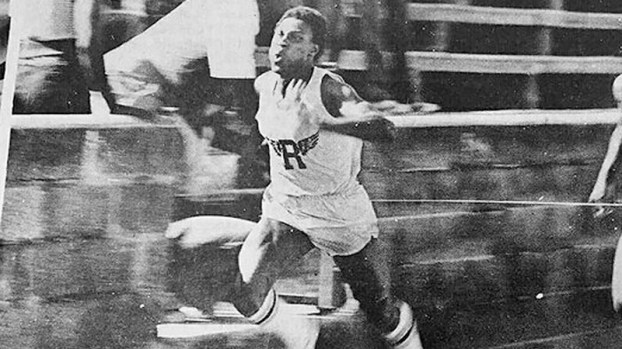 Kenneth August is seen racing down the track as a student athlete with Leon Godchaux High. The team’s athletes wore a large “R” on their chests in honor of the school’s Reserve location in St. John the Baptist Parish.

LAPLACE — Kenneth August of LaPlace was never recruited to Southern University, but he showed up on the first day of school in 1975 with a full four-year athletic scholarship that covered tuition, textbooks and housing.

August is being inducted into the Southern University Sports Hall of Fame Nov. 2 in recognition of his numerous track and field accomplishments, which included a tie for the national record of 3 minutes, 0.3 seconds in the 4×400 meter relay.

The news took August by surprise and brought tears to his eyes.

“To know a group of people appreciate you enough to induct you into the hall of fame is a lifetime accomplishment,” August said.

Growing up in historic Woodland Quarters as the second youngest in a family of 13, August spent a lot of his childhood days running after his older siblings.

Two of Kenneth’s older sisters ran track for Leon Godchaux High School. People would stop and ask him if he could run equally fast.

It turned out, he could.

During his high school career at Leon Godchaux, August helped lead his team to numerous state championships as a middle distance runner. His brilliant performances in the 220- and 440-yard dashes led to MVP designations, highest point awards and attention from opposing teams.

August credits his track career at Southern University to three coaches who noticed him in the high school track circuit.

“I competed against those teams, but the coaches saw something in me,” August said.

“I think all three were Southern University graduates, and they made a phone call on those old black telephones. Those guys called me and told me I was set. All I had to do was show up.”

Kenneth August accumulated numerous awards, MVPs and accolades during his decorated career at Leon Godchaux High, which earned the local student athlete a scholarship to Southern University, where he would continue to star, this time on a national level.

August suspects the coaches called Southern after he won the 400 and the 200 at the meter champions in his senior year of high school.

Previously held in New Orleans, the meter champions put the 1A through 5A state winners head-to-head to decide the ultimate champion.

College opened a new world of competition, marked by coast-to-coast travel to nearly every continental state.

“You could always get a pat on the back from the people you compete against, not just your own team,” August said. “It makes you feel good when your peers respect you. I got a chance to meet a lot of interesting people who played professional sports.”

East St. John head track and field coach Percy Williams attended Southern University alongside August. For the past three years, the two have coached the Wildcats together.

“It’s a 110 percent benefit to have him as a coach because he participated in high school and college, and he was named MVP a couple of times,” Williams said.

“He has the techniques and the know-how about track. He’s a super guy to work with, and he loves working with the kids.”

SJSO asks community to turn out for Night Out Against Crime, Thanksgiving senior luncheon