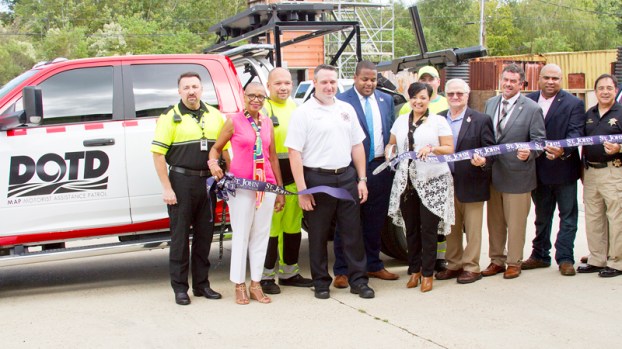 Increased response enhances safety for those stuck on I-10

The trucks are part of a Motorist Assistance Patrol expansion, launched Oct. 1, to cover I-10 from Airline Highway Exit 187 near Gramercy and Loyola Drive in Kenner.

MAP performed 157 services in its first five days in the River Parishes corridor, including eight accident responses and relocation of 53 disabled vehicles, according to director Rick Ardis.

However, Ardis said most of MAP’s cost-free services assist motorists in need of fuel, a tire change, water for an overheating radiator or a vehicle jump-start.

“In one of the worst accidents that could have happened in our parish, one of our firefighters was killed along the Interstate,” Robottom said. “It was the impetus for us approaching the Regional Planning Commission and Department of Transportation about this type of project. It benefits not only our stranded motorists, but also our first responders at accident sites along I-10 to make their jobs easier and safer.”

“Throughout the whole process, no one opposed this expansion,” Robottom said. “It was a matter of getting it to the governor’s office and waiting for funding from the special legislative session to make it happen.”

Hugo Bautista, Rick Ardis and Chris Hinson of Motorist Assistance Patrol were in St. John Parish this week talking about the program expansion.

She stressed the importance of clear roadways to the local community, especially considering I-10’s role in connecting motorists with small businesses.

Robottom also understands the safety concerns of motorists stranded on the shoulder, noting she was in that fearful position last year, when she ran out of gas on the Interstate.

More than 50,000 vehicles cross I-10 each day, according to DOTD representative Joshua Hollins.

Two MAP trucks will be on patrol at any given time, seven days a week from 5:30 a.m. to 7:30 p.m. Trucks are stationed at St. John Fire Station 54 at 220 Woodland Drive in LaPlace to allow easy access to motorists traveling East or West on I-10, Robottom said.

St. Charles Parish President Larry Cochran attended a MAP ribbon cutting ceremony Monday afternoon, and said MAP is a type of service that typically goes unnoticed until it saves someone in need.

Trucks are stationed at the St. John Fire Station on Woodland Drive in LaPlace.

St. James Parish President Timmy Roussel voiced a similar opinion, and he’s grateful to be united in the effort.

“St. James is not a member of RPC, so it’s special for you guys to include us,” Roussel said. “Statistics show, percentage wise, most accidents along that corridor happen in St. James.”

In case of any accident, Ardis said it’s necessary to call 911 first, which will allow MAP to respond alongside Louisiana State Police for improved traffic regulation. In case of flat tires, empty gas tanks or other non-emergencies, contact MAP by dialing *LSP or *577 by phone.