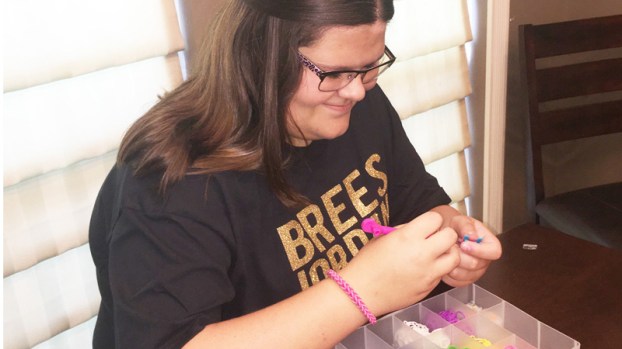 Alyssa Hebert is making braided bracelets for $1 each this month in appreciation of Breast Cancer Awareness Month as a fundraiser for cancer support group Perry’s Posse.

LAPLACE — In hindsight, it was a blessing when school guidelines prevented Alyssa Hebert from coloring her hair for the Pink Dat breast cancer awareness fundraiser.

That initial disappointment prompted Alyssa, 15, to start her own fundraising campaign to assist locals in the fight against cancer.

Each October since 2016, Alyssa has crafted braided bracelets to sell for $1 each. Every donation benefits Perry’s Posse, a nonprofit that provides financial, emotional and spiritual support to active cancer patients in St. John the Baptist, St. Charles and St. James parishes.

While the cost seems small, Alyssa’s bracelets have raised more than $250 for Perry’s Posse thus far.

A lemonade stand Alyssa manned alongside her sister and cousins during the Perry’s Posse’s March garage sale collected an additional $112.

“I started to sell bracelets thinking it would be a dollar here, a dollar there, but I ended up raising $130 my first year for Perry’s Posse,” Alyssa said. “It made me feel good to do something for a nonprofit organization that not many people know about. I want to show people you can be young and still help your parish.”

While the bracelets are traditionally braided in two shades of pink for breast cancer awareness, Alyssa aims to increase proceeds this year by expanding color combinations.

Sales are rising, and it’s not uncommon for Alyssa to receive $5 or $10 bills with a cheerful reminder to keep the change and pay it forward.

Alyssa said it gives her joy to know there are so many people willing to buy a rubber band bracelet from a 15-year-old, knowing it represents a cause larger than any physical item.

The fundraiser is dear to Alyssa because breast cancer is an integral part of her family history.

Alyssa’s middle name is passed down from her grandmother, Mary, who passed away from the disease years before she was born.

However, she didn’t truly understand cancer’s impact until her uncle and aunt were diagnosed.

While the cost seems small, Alyssa’s bracelets have raised more than $250 for Perry’s Posse thus far.

Alyssa remembers her Uncle Kenny Bourg, who recently lost a nine-year battle with cancer, as a kind soul who could make anyone laugh with a good joke.

Her aunt and godmother, Jenny Madere, was diagnosed with stage II breast cancer in August 2017, after a lingering bruise on her breast led doctors to discover a tumor.

Alyssa’s 2018 bracelet sales are dedicated in honor of Madere, who is now cancer-free following a double mastectomy.

“When my Nanny had it, it put it into perspective for me,” Alyssa said. “Seeing how strong she was and how much she had to go through inspired me, so this year I’m giving the money in her name to Perry’s Posse.”

Alyssa’s mother, Teri Hebert, feels a swell of pride each time Alyssa sits down by her Rainbow Loom to make the bracelets.

“She’s so proud to be giving her money to Perry’s Posse,” Hebert said. “Everybody is so proud of her because they’re excited to see a young person doing this year after year.”

According to Hebert, open discussions about cancer and loss have taught the family to never take one second for granted.

GARYVILLE — Nearly every agenda item erupted into a debate over policy and procedure when St. John the Baptist Parish... read more