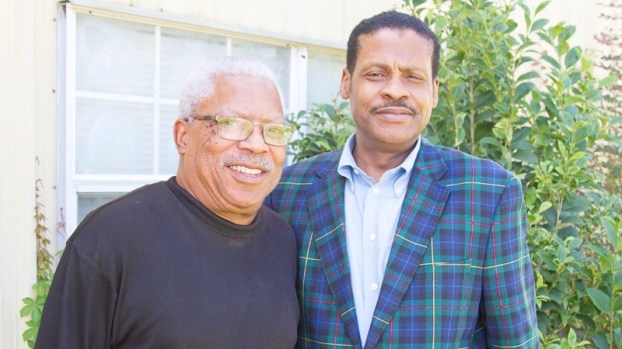 Derek King Sr. and Isaac Newton Farris Jr. stopped by L’OBSERVATEUR and the St. John the Baptist Parish Sheriff’s Office, among other locations this week, as part of a message promoting voting and nonviolent activism.

Farris was too young to understand that his Uncle Martin Luther King Jr. was constantly on the road and fighting tirelessly for racial equality at the height of the civil rights movement.

Farris and his cousin Derek King Sr. spent Thursday afternoon in St. John the Baptist Parish, the first of several stops in an awareness campaign organized by the Rev. Byron Clay of LaPlace.

According to Clay, Farris and King carry on their family legacy by promoting the necessity of voting and nonviolent activism.

“Voting is a civic duty, but it also fosters a sense of belonging,” Farris said. “On presidential years, people tend to be more participatory because it’s the highest profile election in our democratic system. The bottom line is, the president will always be a force, but so much that affects our daily lives is happening at the state and local levels.”

According to Farris, school board members, parish council members and state representatives and senators enact locally focused laws each day, often with less gridlock than the federal government.

When people vote to create a community to be proud of, they become more likely to protect it from abuse, Farris said.

Clay traveled with Farris and King as they spoke in St. John, Tangipahoa and Terrebone parishes Thursday and Friday. Today, they are wrapping up in Jefferson Parish and promoting anti-violence activism.

Clay believes peaceful conflict resolution training is a must for a better future.

“I’ve asked (Farris and King) to publicly encourage people to vote in upcoming elections and speak on the violence that besets out communities and nation in an epidemic proportion,” Clay said.

The Rev. Byron Clay, left, organized an awareness campaign this week in part to bring attention to the case of Armond Jairon Brown, who was killed by police last year. Armond Jairon’s father, Armond Brown, is seen with Clay.

“For almost a year, they have been on a campaign with me seeking justice and fairness for Armond Jairon Brown.”

Brown, an aspiring minister and student at Southeastern Louisiana University, was killed in an incident with the Kenner Police Department Jan. 23, 2017. In the last two years of his life, Brown suffered from a mental condition, and Kenner Police had taken him to the hospital for treatment more than 20 times.

His family maintains he was not a threat to himself or others when he was lured outside his father’s house and shot.

King believes it’s a tragedy that deserves justice along with more accountability and training for those tasked with carrying guns.

While the world has made great strides since the time when King grew up in the midst of segregation, King said there’s been a loss of love.

“We spent time with extended family and valued property, life, education and work. We had neighborhood. Now we’ve just got the hood and those who have escaped.”

King and Farris promote the teachings of Dr. Martin Luther King at The King Center in Atlanta.