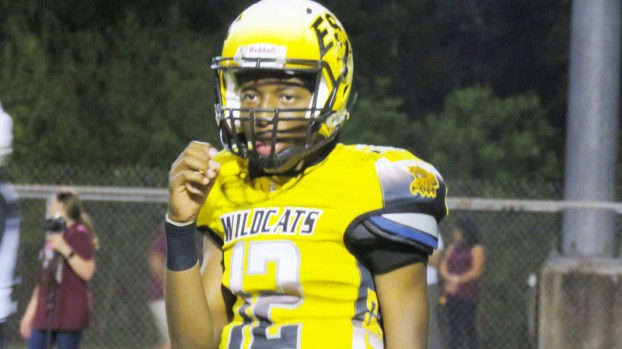 RESERVE — River Parishes football fans can add another story to the lore of East St. John vs. Destrehan football — another down-to-the wire fight in the annual Battle of the River Parishes Wildcats.

Destrehan put together two 99-yard drives in the second half and held off a late East St. John (2-4) rally to take a 35-34 victory.

It’s the seventh straight win in the series for Destrehan, but Coach Steve Robicheaux said East St. John gave his team as much as it could handle.

“My hat’s off to them. They played a heck of a game,” Robicheaux said. “They’re a different East St. John team, I promise you.”

First-year-coach Brandon Brown was left to console his heart-broken Wildcats, who have lost three games by 2 points or less.

“We’re just a play or two away,” Brown said. “We just have to keep working.”

After a scoreless first quarter, the dueling Wildcats put on a fantastic football display, with the final outcome determined, essentially, by one play – a PAT.

Trailing Destrehan 35-28 with less than 4 minutes remaining, East St. John’s Prentice Cook went around the left side for a 22-yard touchdown that brought his team to within 1 point of a Destrehan.

For a moment, first-year East St. John coach Brandon Brown considered going for the 2-point conversion, until one of his Wildcats jumped offsides. Then he decided to kick.

Destrehan’s Champ Craven decided it was up to him to stop it. And he did, throwing his body in front of the ball to block the attempt and leave Destrehan with a 35-34 lead with 3:47 remaining.

East St. John got another chance, but a few minutes later, Craven and teammates Dontrell Smith, Tyler Morton and Denzel Riley broke up a desperation pass by East St. John quarterback Sean Shelby to force a turnover on downs and seal the 35-34 win.

“I knew they were going to tie it up if they made it and I didn’t want to leave my offense having to go down the field, so I wanted to help them out and make a big play,” said Craven, who blocked an East St. John field goal attempt earlier in the game.

It was followed, however, by Dontrell Smith’s 99-yard kickoff return which tied the game with 11:53 remaining in the first quarter.

East St. John answered with a 61-yard run by Calvin Gardner, then Destrehan came back with a 32-yard pass from JR Blood to Quincy Brown to tie it at 14.

Just before the half, East St. John regained the lead when Shelby connected with Darius Monroe for a 37-yard pass. After an excessive celebration penalty, ESJ missed the PAT, but still led 20-14.

Destrehan scored twice in the third quarter, including a 7-yard run by Carl Lewis and a 99-yard drive capped by a 9-yard touchdown pass from Blood to Carson Reider.

But on the first play of the fourth quarter, Dontae Fleming broke free for a 70-yard touchdown catch to tie the game at 28 with 11:48 remaining.

After twice holding off East St. John – including a four-play goal line stand at the 1, Destrehan took its final lead with 5:27 remaining when Kyle Edwards scored from the 29 to make it 35-28.