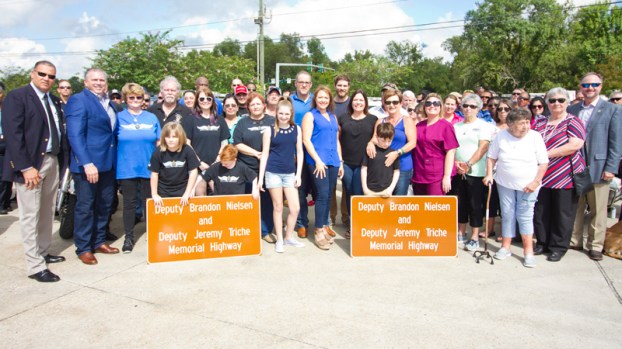 A large crowd of family, friends and Sheriff’s Office representatives from St. John Parish and gather in Garyville Monday to dedicate a portion of Airline Highway.

GARYVILLE — It’s not often State Rep. Clay Schexnayder witnesses the Louisiana House of Representatives and Senate come together in a unanimous vote, regardless of political affiliations.

A large crowd of family, friends and Sheriff’s Office representatives from St. John Parish and beyond gathered in Garyville Monday morning to dedicate a portion of Airline Highway to Nielsen and Triche, who were slain in the line of duty during a domestic terrorist ambush in August 2012.

Hereafter, the segment of Airline Highway from Louisiana 54 in Garyville to U.S. 51 in LaPlace will be known as the Deputy Brandon Nielsen and Deputy Jeremy Triche Memorial Highway.

“Republicans or democrats, it didn’t really matter because everyone was in support,” Schexnayder said.

“I told the story of these two brave officers who put their lives on the line, and there were 105 unanimous votes in the House. Senator Gary Smith carried it on the Senate side, and it was the same thing. Unanimous. It was a blessing and a Godsend to be able to do it, and I hope it helps these families have a better future.”

Schexnayder spearheaded the initiative from bill to law after Nielsen’s mother, Wendy Nielsen, reached out through social media.

“A year and a half later, and here we are,” Wendy said, adding she is humbled by the amount of people who attended Monday in support of the dedication.

“It’s incredible to me that this came together from just a Facebook message. We live in Texas, so we don’t know a lot of people here, but it’s so nice to see everybody coming out for Brandon and Jeremy. All of these people here knew Brandon in one form or another.”

Nielsen was 34 years old and a father of five at the time of his death, and Wendy said he’s remembered for his fun-loving personality.

“He was a motor officer,” Wendy said. “That was always his dream from the time he was a little boy. That was his calling, and he became exactly who he wanted to be.”

The experience has connected her with Triche’s family.

Triche’s mother, Edie Triche, said the support from the community has not faded since the murders.

“It’s an indescribable feeling to know that six years later, we still have our community behind our back,” Edie said. “We’re still going through trial, and everybody out here are our supporters. My heart is full seeing all these people honor Jeremy and Brandon for being heroes.”

Triche, a LaPlace native, was 27 at his time of death and a father of one.

“I know he’s looking down today and saying, ‘Mama, don’t put me on a pedestal,’ but even as a small child, he would give someone else what he had,” Edie said.

The foundation’s current goal is to construct a memorial near the park on U.S. 51 in LaPlace within the next year to honor officers, firefighters and first responders.