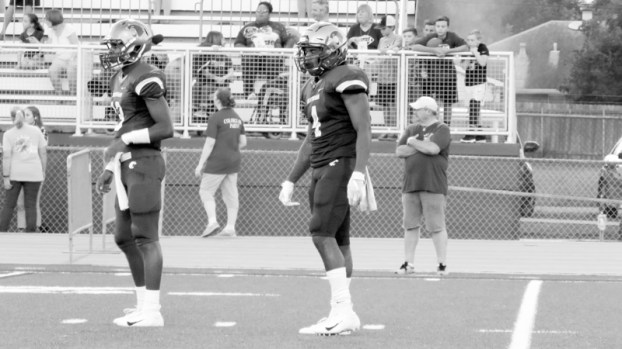 Destrehan quarterback Harold Blood and running back John Emery catch their breath before a play during a Week 2 home game against St. Charles Catholic.

DESTREHAN — John Emery doesn’t need that many touches to do damage.

Opponents of Destrehan High know this all too well.

The senior running back used 15 carries to pound out 156 yards (two touchdowns) in District play last week at Thibodaux, good enough to lead DHS to a 49-10 victory.

Following the game, Emery told a reporter he squats almost 600 pounds and it insults him to allow only one person to take him down. What drives his ability to break so many tackles: his anger. Emery has amassed 821 yards in five weeks, averaging nearly nine yards a carry.

He has totaled 833 yards this season through the air, to go along with 11 passing touchdowns.

Kyle Edwards gives the Wildcats an unheralded (for now) second rushing option with 254 yards on more than six yards-per-carry.

The Wildcats are 4-1 on the season and undefeated with two wins so far in District play. Destrehan travels to East St. John on Friday in hopes of grabbing a stranglehold in District 7-5A.

Defensively, Champ Craven and Dontrell Smith set the tone for the Wildcats defenders.