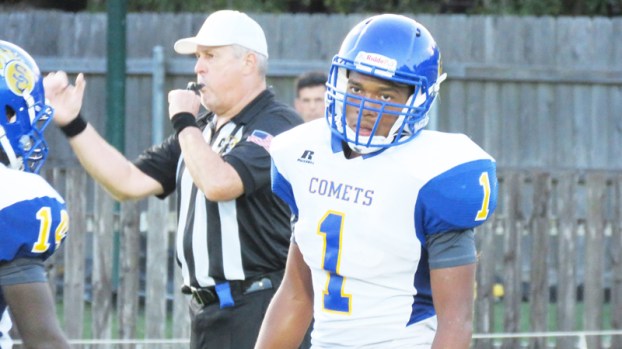 Comets offense ready to launch in season’s 2nd half

LAPLACE — The Comets have only scored one touchdown total in their last eight quarters.

The result is a St. Charles Catholic (2-3) team with a losing record through the halfway point of the season and some questions (on offense) to answer with five games to go before the playoffs.

SCC surely faced a tough opponent Friday, when one of the state’s powers — East Ascension (5-0) — came to LaPlace and won through raindrops, 21-3.

The Spartans held SCC to less than three yards per play, extending a trend of mediocre offensive performances.

Taylor Miller is the only Comets receiver with more than 100 yards receiving this year.

Following a tough 11-10 loss to Country Day in Week 4, St. Charles coach Frank Monica said, “They outplayed us. We did a bunch of mistakes in the red zone, and we are not a smart football team. We have all of the symptoms of a losing team. We thought we were prepared. We thought we had a decent week of practice. But we couldn’t do anything right.”

The Comets have victories this season over Chalmette and Wilkinson County (Miss.) and losses to strong squads Destrehan, Country Day and East Ascension.

Comets coach Frank Monica, in his 16th year coaching SCC, is working to get more from his offense in 2018.

The passing combination of quarterback Justin Dumas and wide receiver Taylor Miller has found success this season, while Dumas, as well as running backs Joe Chiarella and Phillip Tran offer potential speaks in the running game.

A home game against Lusher and the beginning of the District slate at Donaldsonville and home against Haynes Academy offer opportunities for better gameplay.

SCC fans can certainly get excited about their defense. The Comets have only allowed one team to score more than 21 points per game and are giving up only 15.2 per contest.

Rain was the driving force across Southeast Louisiana Friday night, as it impacted football games all over. St. John the... read more