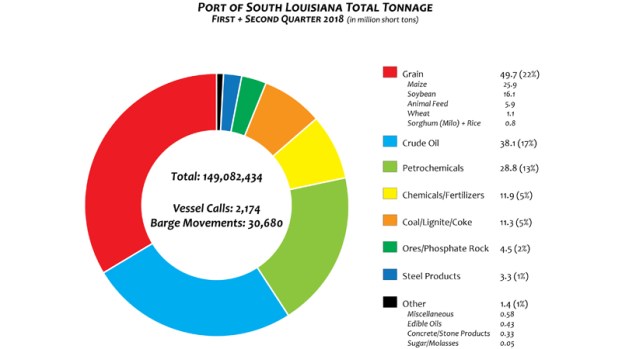 In a continued effort to strengthen partnerships with organizations in the River Region and Louisiana, Port of South Louisiana’s efforts during the second quarter of the year focused on economic development, global trade and education.

In May, for instance, in alliance with St. John the Baptist Parish, the Port hosted a breakfast as part of the parish’s celebration of National Economic Development Week. We were honored to have Congressman Cedric Richmond as our special guest and speaker at the well-attended event, which was held to highlight the Port’s economic development impact on the River Region, the state and the U.S.

The Port of South Louisiana is proud to be an economic development partner, and during the event, aimed to recognize all those in the River Region and the state who are active in the creation, retention and expansion of jobs, the development of a stable tax base and new industrial investments.

During the month of June, the Port of South Louisiana and the World Trade Center of New Orleans welcomed a delegation of European Union dignitaries who were in Louisiana for a regional two-day tour that focused on issues relating to EU-U.S. trade.

The Port of South Louisiana also provided an overview of its operations, conveying how our location along the Mississippi River affords opportunities to manufacturers to import raw materials and export finished products throughout the world easily and affordably, making for an ideal partnership with companies overseas.

This advantage is what makes the Port of South Louisiana the largest tonnage port in the Western Hemisphere and the 16th largest tonnage port in the world. In late July, the Port of South Louisiana affirmed its commitment to land conservation and maritime industry education by entering into cooperative endeavor agreements with both State University and River Parishes Community College.

Two years ago, the Port signed an agreement with Nicholls pledging to support and promote the latter’s Coastal Restoration Program, which seeks to restore and preserve Louisiana’s wetlands, marshes and beach fronts. We reasserted the financial commitment recently and, in return, Nicholls will continue to provide monthly status reports, updates and other data related to the program’s milestones, goals and achievements.

Moreover, the Port of South Louisiana is also supporting River Parishes Community College’s attempt to develop and implement a Maritime Workforce Program. As maritime businesses seek to expand and add jobs, the RPCC program will be geared toward providing participants with the needed skills and training (including deckhand, safety, and rescue operations) to fill the spots created in the field.

Lastly, we couldn’t be more excited about the recent final economic justification report endorsement by the U.S. Army Corps of Engineers to dredge the Lower Mississippi River channel to 50 feet, a call to action aimed at Congress to appropriate the required funding in next fiscal year’s budget.

The Port of South Louisiana actively campaigns for the project and wholeheartedly supports Big River Coalition, who has been instrumental in pushing this effort forward. Currently, we are reaching out to our stakeholders for their support in this endeavor and we are confident that the response will be positive.

The Port of South Louisiana takes pride in cultivating business relationships and partnerships with regional businesses, global companies and local educational institutions as part of our mission to grow the region’s economy and bring prosperity to its individuals.

October brings to mind images of pumpkins, chrysanthemums and falling leaves to many gardeners and homeowners. It makes me think... read more