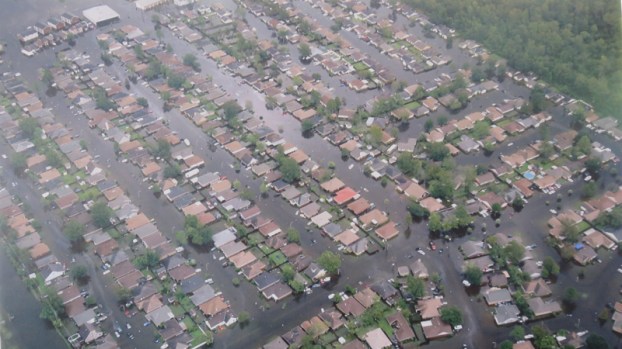 Hurricane Isaac floodwater had a huge impact in St. John the Baptist Parish.

The latest tango among a burgeoning list of skirmishes between the parish’s top two governmental entities seemingly is grounded in the interpretation of one word, and depending on the outcome of this latest dustup, additional delays of up to six weeks or perhaps longer are possible.

The dispute centers around the administration’s request to the council to amend a contract with Pivotal Engineering of New Orleans for additional services the firm is providing for the CBDG Isaac Housing Program.

During Tuesday’s council meeting, Robottom said the amendment is necessary to pay Pivotal for inspection services it is now providing, services that were not part of the original contract.

Robottom added those inspections are needed to identify any residents who could potentially be receiving or have received duplication of benefits, such as CBDG grant money and FEMA funds.

And therein lies the quagmire. A provision in the original contract states, “the owner may from time to time request changes in the scope of the services of the contractor to be performed.” It goes on to read that the changes shall be “incorporated in written and executed amendments” to the contract.

Unresolved, however, at least between Robottom and Green, and a matter that has left Council members flustered, is the definition of “owner” as stated. Robottom insists it is referring to the parish, which, she says, would allow for the amendment. Green said he believes “owner” to mean the homeowner, which would prohibit the parish from amending the original contract.

“We need to verify the homeowners did not get duplication of benefits,” Robottom said, adding Pivotal’s performance regarding the inspections has been excellent. “Pivotal is doing extra work and they want to get paid for it.”

She added the Council has the ability to amend contracts as long as the “other parties agree.”

But Green reiterated his legal stance, saying the contract “does not have any language that authorizes the amendment, so it can’t be amended.”

Robottom said the inspection work is required to continue the program and work will cease without approval from the Council.

“I wonder if the Council understands what we are being asked to do,” councilman Larry Snyder said. “I have (several residents in my district using the grant program) so I pay more attention (to the process) than other Council members.”

An exasperated councilman, Kurt Becnel, said he has at least three constituents who are in varying stages of the rebuilding process and spoke of one resident who is only weeks from potentially moving back into her home. However, this latest hiccup could delay the process even further, adding to the frustration.

“People have been waiting 16 months; I don’t believe in stalling and delaying,” Becnel said.

At one point, Council member Julia Remondet asked Green for suggestions as to how the matter could be quickly resolved. He said he had no ideas on a resolution, as he was strictly evaluating the legal merits of the contract but acknowledged, “sounds like we need a new contract.”

He mentioned the contract could be rebid.

Robottom explained that Pivotal, along with Royal Engineering, who was initially hired to oversee the program, developed a hands-on process investigating any potential duplication of benefits, and that process has been heralded by the state Office of Community Development.

The investigations of more than 50 homeowners are focused on whether the CBDG money was utilized for the intended purpose, instead of going to other purposes, which has been uncovered.

When it has been determined the money has been misused, Robottom said the resident is responsible for repayment of those funds.

She said because of the confusion in the language of some of the government programs, the process with Pivotal is a “great way to help the citizens (avoid unknowingly receiving duplication of benefits). Anything that lessens the burden of the citizens is helpful.”

Questions regarding who was at fault remain unanswered. Some Council members blamed Royal, and said they should have to pay Pivotal the additional charges once all of the inspections are completed. Pivotal is charging either $500 per inspection or $250 per inspection, depending on the scope of the work.

Robottom said she believes the genesis of the current problem was mistakes made during the initial intake process.

She did say the additional work being performed by Pivotal will be paid through CBDG funds and will come at no cost to the parish.

“It seems like a mess on all levels,” Councilwoman Jaclyn Hotard said. “We still have people caught in red tape and they can’t get out of it. We have to take responsibility.”

Council Marvin Perrilloux conceded he was confused by the verbal sparring and made a motion for the item to be tabled, which was approved 7-2, with Becnel and Remondet voting against it. Remondet had made a motion to approve administration’s request, but it was then Perrilloux who made his substitute motion.

“I don’t understand why we are making such a big deal out of something so simple,” Becnel said, reiterating it was in the best interest of the residents to not add another delay.