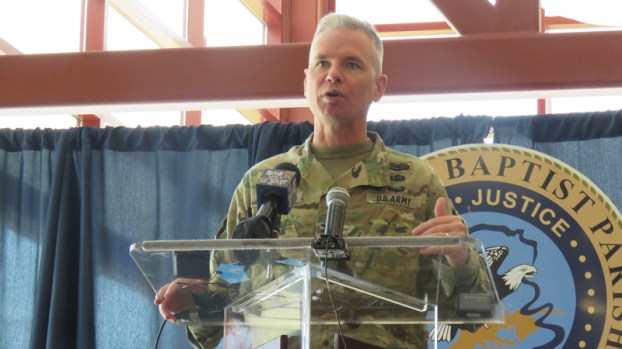 LAPLACE — It could take as many as 19 contracts to complete work on the massive West Shore Levee project designed to protect St. John the Baptist Parish and beyond from a 100-year storm.

The federal government has already provided $760 million to fund the project, meaning the watchful eyes of thousands of local residents and more than a few potential contractors are wondering how that money is going to be spent.

LaPlace resident Amber Labat was among those devastated by Hurricane Isaac in 2012. Flood damage led to the demolition of her and her grandparents’ neighboring homes off of Old U.S. 51.

Among the storm water, she lost furniture, pictures and home videos, her favorite childhood skates and other treasured memories.

While Labat has learned the importance of planning ahead, she doesn’t see the levee as a solid path to hurricane protection, and she feels decision-making on design and financials is out of her hands.

“Maybe if I was part of the planning, I would know more about (the levee),” Labat said. “All I can do is pray they do the best they can do. Even if they put up a steel wall, I don’t know what will happen. You can build the best structure in the world, and Mother Nature can still knock it down.”

Councilman-at-large Larry Sorapuru Jr. said residents should feel confident the West Shore Levee will be completed by 2023 and protect the community as promised.

“I feel confident because I think everyone has a very genuine concern and obligation to get this done,” Sorapuru said. “People understand we need flood protection. It has been on the books since the 1970s.”

Sorapuru said fear of fraud or mismanagement is not a valid concern, adding St. John the Baptist Parish is taking steps to ensure funding is spent as intended.

“The Council is looking to put a company or a person in charge of just that, to report to the Council and Parish President on a monthly basis with updates on how the money is being spent,” Sorapuru said.

According to Ricky Boyet, chief of public affairs for the U.S. Army Corps of Engineers New Orleans District, the Corps has not yet finalized the project’s budget breakdown.

However, he said a Department of the Army Chief of Engineers report used to procure full funding is being used as a budgeting blueprint.

According to Boyet, the estimated cost for the project includes $613 million for initial construction and $105.09 million for future levee lifts. Within the budget, $91.4 million is allotted for environmental mitigation and management.

An estimated 35 percent of total project costs will be dedicated to design work, obtaining rights-of-way to access land and improvements required to the land prior to levee construction.

Poirrier said the Levee District has started phase one, which involves obtaining right of entry from approximately 20 landowners between the Bonnet Carre Spillway in St. Charles Parish and Pin Oak Terminals in St. John Parish.

He expects landowners impacted by the 18-mile stretch of the levee alignment will be contacted within three to four months.

“Getting right of entry from the landowners will allow the Corps to go out and do some survey work and soil borings,” Poirrier said. “That’s the information necessary so they can start working on the final design of the levee. Once you have the final design underway, that’s when you start sending out contracts and acquiring real estate.”

Industry days will be announced within the next two years to meet with potential contractors and discuss environmental mitigation, according to Boyet. Though a bidding date has not been set, he said engineers might be contracted sooner to aid in design work.

After the federal government approved $760 million in full funding to the West Shore levee project, some residents were concerned the design phase was not completed upfront.

According to Boyet, the maps released to the public had just enough information to obtain federal funding for further study.

“When we do a feasibility study, we look to see if there’s a federal interest in the project and evaluate alternatives,” Boyet said. “Once approved for construction, we lay out a plan of exactly what we need to do.”

While the design phase might see slight changes to alignments, unnoticeable from a bird’s eye view, Boyet said soil borings are necessary to understand the texture of the land and which areas are best suited for 100-year storm protection.

After surveys are completed, the Corps of Engineers will release updated maps allowing Levee District and Coastal Protection and Restoration Authority to begin real estate acquisition, projected to wrap up by the end of 2020.

Parish government officials are invited to monthly partnership meetings with the U.S. Army Corps of Engineers, the Pontchartrain Levee District and Coastal Protection and Restoration Authority to discuss the West Shore Levee Project.

“Typically, the Corps will have status reports on the projects on their website, and the Levee District will likely have website updates as well,” Poirrier said, adding there is no set timeline for when or how often updates will be posted.

“We are still in the initial phases. I’m sure it’s frustrating because there will be times when it seems like nothing is going on, when really there is a lot of work being done. We’re focused on getting (residents) the levee they deserve as soon as we possibly can.”

The West Shore Levee Project includes construction of an 18-mile levee system around the communities of Montz, LaPlace, Reserve and Garyville.

Earthen levee and floodwalls, four floodgates, a drainage canal running parallel to the levee a flood-side ditch connecting wetlands to the north and south of the structure, two drainage structures and four pump stations will be built to a 2070 design elevation for anticipated sea level rise.

One-way flap gates to existing culverts under Highway 3125, small ring barriers around an estimated nine structures and nonstructural elevation of approximately 14 residential structures was also proposed for St. James Parish in a Chief of Engineers report.

Construction is anticipated to be complete by 2023.

LAPLACE — Brittney Jackson was among those alarmed by unexpected charges from the LaPlace Goodwill to her bank account this... read more