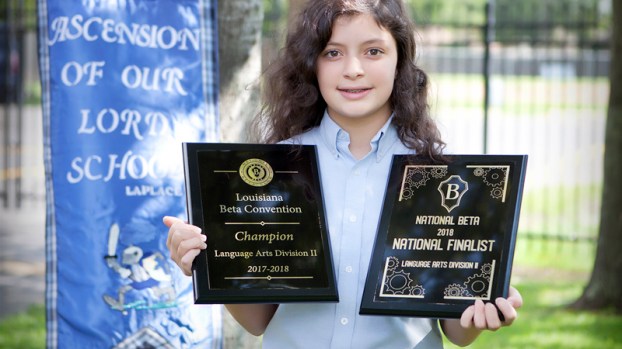 Katherine Bergeron turns 13 on Oct. 10 and soon will be installed as the Ascension of Our Lord Junior Beta Club President.

Katherine Bergeron is one of the local student athletes making a name for herself across the state, and now, the nation.

The seventh grader will turn 13 on Oct. 10 and soon be installed as the Ascension of Our Lord Junior Beta Club President.

Last school year, Bergeron competed in the Language Arts academic test at the state convention and was named champion of all Louisiana sixth grade participants.

She then traveled to Savannah, Ga., to compete at the National Junior Beta Club Convention and placed eighth overall.

When we talked this week about the experience, Katherine said she was nervous, at first, but quickly found comfort with the national convention process.

“They took a lot of people in this room and gave us all a test packet, a scantron, told us ‘good luck’ and let us take the test,” she recalled. “They make you sit and I don’t think you could use the bathroom in the middle. No cell phones, electronics or anything like that. We were in a big room full of many tables and lots of chairs. It might have been between 45 minutes to an hour. It was one of the longest tests I have ever taken.”

Katherine, known to her close friends as Kat, focused as best she could on each question. It was obvious that standing out in this group would not be easy.

“Before the test, we talked a little bit and kind of met each other, and then, no talking during the test,” Katherine said about the other students. “I was thinking the rest of the people were pretty smart because they made it here. They were all pretty friendly and nice. I saw a lot of groups there from Louisiana but I didn’t know any of them personally.”

She found out the next day about her top ten ranking, adding it was really exciting.

She was able to share the moment with her parents and brother, who also made the trip to Georgia.

Her initial reward was picking the family’s dinner location: “There is this little place called Henry’s that we went and everybody, pretty much, enjoyed it,” she said.

According to Katherine, Language Arts comes easily because she enjoys learning new stuff and is drawn to sentence structure and new words.

“I write a lot in class, different journals and essays,” she says. “I sometimes write for fun, too, like making up characters or about my own experiences.”

She joined Junior Beta in sixth grade and enjoys working with other students in a bonding experience.

Performing with her peers in a group dance has also been a competition highlight. There are plans to do it again.

Outside of class, Katherine enjoys activities with friends and playing volleyball, softball and basketball, but soccer is her favorite.

She plans to attend St. Charles Catholic for high school and is looking at a career in engineering thanks to inspiration from her dad and sister.

If she keeps racking up state and national Beta success, there will be others inspired by Katherine.

L’OBSERVATEUR readers surely recognize her name, as she has been featured numerous times before for her achievements, which include winning the Keep Christ in Christmas Poster Contest and becoming a Duke TIP (Talented Identification Program) qualifier for being in the 95th percentile on last year’s standardized test.

The Workforce Development Committee has been hard at work following the execution of the memorandum of understanding from May 7,... read more