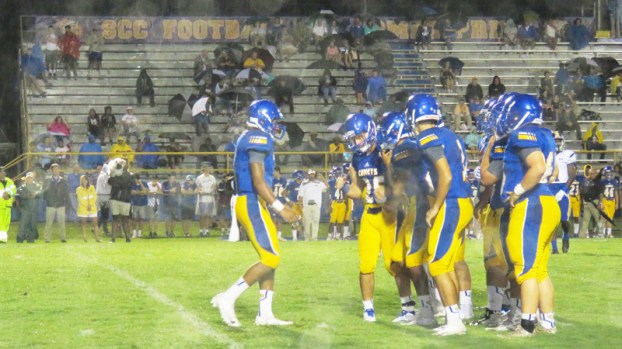 Rain was the driving force across Southeast Louisiana Friday night, as it impacted football games all over.

St. John the Baptist Parish was no exception, with delayed start times and sub-par field conditions impacting all four local teams in some form or another.

St. Charles Catholic’s game in LaPlace was pushed back an hour and still took place under light rainfall.

Knowing points would come at a premium the whole game, East Ascension High (5-0) pushed the envelope early in the first quarter, going for it on fourth-and-7 less than four minutes into the game at the Comets 23-yardline.

The result of the gamble was a rifle-armed touchdown from quarterback Jason Wakefield.

SCC (2-3) took its ensuing possession into Spartans territory and quickly faced a fourth down of its own. The Comets went for it and came up short.

Fighting up hill on a sloppy track against a powerful opponent was too much for St. Charles Catholic, as the Comets lost 21-2 at home.

Riverside was balanced on the scoreboard, notching a touchdown in each quarter but could not keep up with the Cavaliers, who exploded for three touchdowns in the third quarter to put the game out of reach.

The two teams were actually tied at 6 points apiece after one quarter before WSJH exploded for 34 in the second quarter, leaving no doubt as to who the better team was.

The Rams return to action next week against Houma Christian.

The East St. John High Wildcats held a tenuous 6-0 lead late against H.L. Bourgeois in Houma, but it didn’t last.

The Braves (2-3) scored a rushing touchdown with 12 seconds on the clock and followed it up with an extra-point conversion to take the game, 7-6.

“At the end of the day, I told the kids that game was on me,” Brown said. “I don’t think I had them prepared to play. I kind of saw it coming between the big win at Central Lafourche and Destrehan coming up next week. I just didn’t think we were focused and ready to play H.L. Bourgeois. They beat our butt.”

Brown said his defense played extremely well Thursday; however, they didn’t make the plays when it counted.

“The game was in the defense’s hands,” Brown said. “(The Braves) had the ball last. At fourth down, we just needed to make one stop, and we didn’t get it done.”

An inconsistent offense hurt the Wildcats again. Combined with the sloppiest field East St. John (2-3) will play on all season, it added to zero points scored in a conventional fashion.

It was with just more than five minutes remaining in the game that senior linebacker Kendrell Holmes blocked a punt deep in H.L. Bourgeois territory, recovering it in the process to put the Wildcats up 6-0. It in the end, it wasn’t enough.

A year ago, ESJH dominated the Braves for a 34–13 victory in Reserve.

That was not the case on Thursday.

“We have to be focused and take every opponent seriously,” Brown said. “Our kids and our coaches have to understand every play counts, from the very beginning to the very last play. Once we got up 6-0, we relaxed a little bit and lost the game within the last 20 seconds or so.

“I think we’ll be in good shape the next couple of weeks. We need to be consistent and finish strong.”

EDGARD — Practice in Edgard; games on the road. It’s a formula Rams players and fans are getting used to... read more