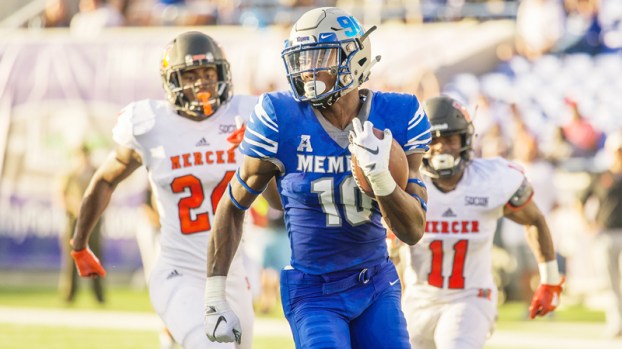 Coxie caught five passes for a team-leading 67 yards during the game, a 40 to 24 win for Tulane — another clear step forward on his way to becoming a college difference maker.

The third year sophomore from Reserve has already made a name for himself in Tennessee, earning Dean’s List honors and preseason all conference team mentions before this football season even started.

“When I first got here, Anthony Miller and Phil Mayhue set down the rules,” Coxie recently told his school’s sports information website. “They said those one-handed catches, anybody can make them. But if you want the ball you’re going to have to learn to block.”

Receivers coach Desmond Lindsey, in his first season as a Memphis assistant, says Coxie “brings energy on a daily basis.”

“And his leadership skills have progressed,” Lindsey said. “He tries to lead by example. From the time I’ve gotten here — from the winter drills to now — he has been busting his tail.”

The two formed a relationship when Coxie was in high school and Johnson was an assistant at Tulane.

Damonte Coxie’s work in practice has earned his coaches’ respect, leading to production on the field.

“I just trusted him, and I trusted coach (Mike) Norvell,” Coxie said. “They believed in me and I believed in them. They had my best interests (at heart).”

Norvell has watched Coxie, who is 6-3 and 200 pounds, develop from the team’s 2016 offensive scout team player of the year to a counted-on starter.

“When he steps on the practice field there’s one purpose,” Norvell said. “That’s to compete and get better. That’s what I’ve always respected about him. Even when he was redshirted, he brought it every day. He is showing he can be a go-to receiver because of that.”

Coxie appeared in 13 games as a freshman and had 21 catches for 323 yards and three touchdowns. He made his first start Sept. 1 against Mercer and finished with a career-best 79 receiving yards.

In the Mercer win, each of Coxie’s four catches resulted in a first down — one was for a touchdown.

Coxie was a multi-sport star at East St. John, excelling on football fields and track stadiums following a transfer from Tara High. He was a member of L’OBSERVATEUR’s All-St. John football team after a senior season that included 54 catches, 1,182 yards and 12 touchdowns.

Rain was the driving force across Southeast Louisiana Friday night, as it impacted football games all over. St. John the... read more