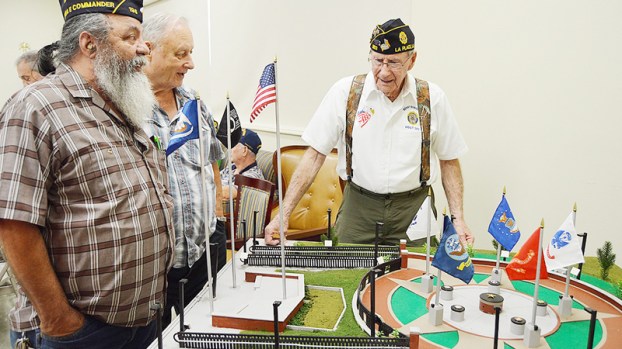 Harold Landry, from left, John Roane and Benny Robichaux look over a facsimile of a memorial designed for Armed Services members and first responders.

Motorists traveling down Airline Highway in front of the Southeast Louisiana Veterans Home will one day see scaling flags and pedestals honoring each branch of the service. Two 8-feet wide promenades wrap around the existing flags and provide ample room for guests to proudly march toward the center of the memorial, where they can observe a tribute to gold star families who have lost loved ones in active duty.

“It’s designed as a five-point star sitting on a compass rose, indicating we would go anywhere to defend our freedoms,” Robichaux said.

Nearly 5,000 brick pavers will display names of service members past and present, and those walking through can dive into history by reading 18 informational stations spaced around the memorial.

Post #383 has yearned to build the memorial for years, but Robichaux said plans picked up speed once he and Post Commander Allan Reynaud joined the leadership team.

St. John firefighter Spencer Chauvin’s tragic death in 2016 provided more inspiration to honor those who have risked their lives for service, Robichaux said.

Now that the model is built, Robichaux and the American Legion Post are kicking off an effort to raise $250,000 to see it come to life.

“We have the lieutenant governor and the secretary of the Department of Veterans agreeing to work with us, and we’re going to contact anybody and everybody we can, up to Ellen DeGeneres,” Robichaux said. “I’m an almost 91-year-old World War II vet hoping I live long enough to see this get started.”

Toby Reynaud and Pat Robichaux stand in front of the memorial model.

Robichaux’s plans don’t end with the memorial; he is planning phase II of the project, which will be collectively termed the Veterans Liberty Memorial/Park.

“Even though this home is run extremely well, people still need a place where they can get out, relax and reminisce,” Robichaux said. “I think that would go a long way toward residents’ health and mental well being.”

Reynaud said American Legion members are willing to assist in fundraisers in any way necessary.

“This is going to be a community project,” Reynaud said. “Once it’s built, we’ll turn it over to the state to maintain it. We want to make sure there is enough money available to replace flags when that needs to be done.”

The end goal is to inspire memorials at the other four veterans homes across Louisiana. Robichaux wants the full $250,000 in the bank before construction begins to ensure it is completed as intended. After it’s turned over to the state, brick paver sales will generate funds to maintain it. Tax-deductible brick sales are open now for $100, according to Robichaux.