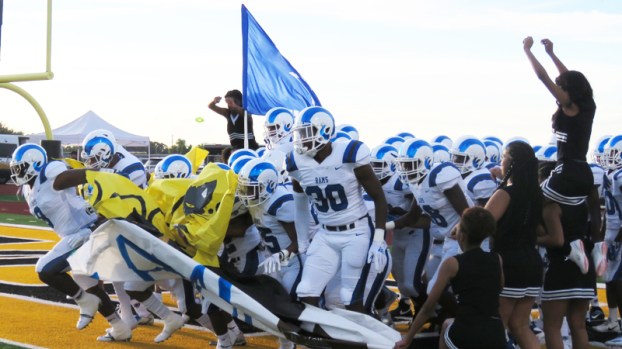 The West St. John Rams are shown taking the field in their 2018 regular season opener.

EDGARD — Practice in Edgard; games on the road.

It’s a formula Rams players and fans are getting used to as West St. John (2-2) is in the middle of a five-game road trip.

Running back Kylan Duhe continues to be a rock WSJH can count on, as the senior carried the ball 21 times for 139 yards in last week’s 31-6 road loss at Plaquemine.

The Rams travel to White Castle this week in a situation that is eerily similar to last season. The greater West St. John family is hoping for similar results.

WSJH entered last year’s contest at 2-2 before steamrolling to a 61-6 victory, the beginning of a multi-month win streak that ended in a state championship.

The Bulldogs defense might be in for similar trouble this week, as a hungry Rams squad awaits.