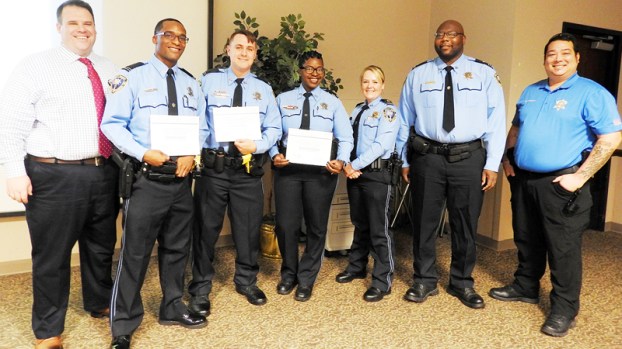 LAPLACE — The Tri-Regional Commission of the Louisiana Emergency Response Network honored officers Shaquille Guerin, Jared Seruntine and Javonna Cordova Sept. 19 for their quick and efficient actions that saved the life of a man who was “butchered” with a machete during a vicious attack in August.

The tourniquets the officers applied to the man’s arms were essential, Dr. Jeffrey Elder said during the award presentation.

The attack victim lost a critical amount of blood and any further loss of blood may have caused his immediate death, Elder said.

This incident resulted in a positive outcome for the victim because of the actions of these officers, Elder said.

Officers also are equipped with a tourniquet and gauze kit to carry while on duty.

At the time of the suspect’s arrest in August, Sheriff Mike Tregre said “it was very vicious. (The assailant) just completely butchered this guy. I firmly believe if it wasn’t for my officers arriving and applying a tourniquet, he probably would have died.”