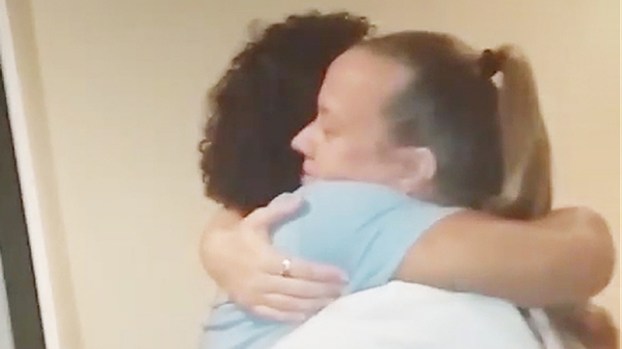 Justin James, left, gives a great big hug to Nanci Dozier after learning she was cleared to donate a kidney to him.

LAPLACE — Upon learning her former neighbor, Justin James of LaPlace, was in need of a kidney transplant, Nanci Dozier offered her kidney without hesitation.

To Dozier, the facts are simple: She and James are blood type O. She has two functional kidneys, and James only needs one.

Dozier’s initial offer came from a conversation with James’ mother, Tysha Martin, outside of her parents’ LaPlace home in late May.

“After I said I could donate, his mom didn’t tell him because they’ve heard it a thousand times,” Dozier said. “No one ever follows through, so they didn’t think anything of it.”

Unlike the others, Dozier was completely serious.

Martin saw her Facebook message requests for health provider contact information in June, just after James was disheartened by news that he wouldn’t receive the kidney transplant he was second in line for.

Nanci Dozier and Justin James are all smiles after Dozier surprised her former neighbor with a T-shirt that cemented her decision to donate a kidney to him.

Fighting chronic kidney disease has been a seven-year process for James, but there is hope just around the corner.

On Sept. 14, Martin told James to get dressed for an outing to Olive Garden, and he immediately knew something was up.

His father wasn’t getting ready, and when the doorbell rang, his mother seemed excited when she asked him to answer it.

Dozier was in the doorway, smiling in a custom made shirt that said, “It’s official! Justin, you can have my spare. Love, Nanci.”

It took a minute for James to process the momentous meaning behind the words.

“At that moment, I was void of emotion because I never expected this would happen for me,” James said. “For her to go through all this testing to be cleared as a donor just so I can have life is amazing to me.”

According to James, the transplant surgery should be set for November or December.

James first noticed his symptoms just before his 21st birthday. Within two days of finding out he had a fluid overload, Justin noticed he felt very thirsty, had irregularities in his urine and put on extra weight in his face.

“It’s truly a blessing and I’m so thankful I had to wait these seven years because I’ve matured a lot,” James said.

“I’ve grown mentally, emotionally and, most of all, spiritually. This has brought me closer to God and closer to family.”

Martin said she is overwhelmed by Dozier’s generosity.

“She has the tenacity of a mama bear,” Martin said. “I birthed Justin, but she’s giving him something I can’t give him.”

As Dozier researched kidney donation, she was surprised by how strong a need there is.
“I found out kidneys are the most needed organ, and they are the most accessible because everyone has two,” Dozier said.

“Being a living donor is extremely easy. It’s not a huge risk because they won’t take an organ from you without knowing you are healthy.”

According to Tracey Eldridge of the National Kidney Foundation of Louisiana, those most at risk are minority groups, people age 60 or older and those who have a family history of diabetes or high blood pressure.

Of the 1.5 million at risk, Eldridge said 460,000 live with chronic kidney disease in Louisiana. There are 10,000 receiving dialysis statewide and approximately 1,900 qualified for kidney donation waiting lists.

After his transplant, James hopes to promote kidney disease awareness, noting symptoms can strike at any age.