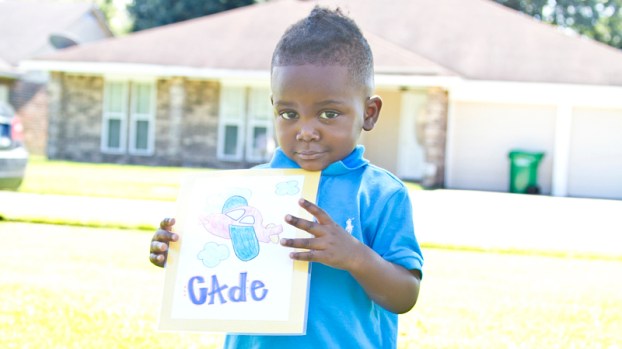 Cade Anderson, pictured holding the sign that once marked his NICU incubator, has defied just about all of his doctors’ expectations after his high risk birth. He is about to turn 2, and his future looks extremely bright.

Doctors didn’t expect little Cade Anderson of LaPlace to survive long after a tumultuous delivery deprived him of oxygen for nearly seven minutes at birth.

On the day of Aurejana Ceaser-Anderson’s planned caesarian section, complications caused the placenta to come out first. Cade coded and had to be resuscitated shortly after birth, while his kidneys and liver went into organ failure and his brain began to swell.

Cade’s family said it took an act of God to see Cade through those first rough days.

Against all odds, Cade is celebrating his second birthday Friday.

He’s a perfectly healthy toddler who loves to run, climb, count numbers and point out the moon and stars in the night sky.

Oxygen deprivation in the first minutes of Cade’s life made his future uncertain, but his family had faith that God would give him the strength to pull through.

Aurejana describes her son as outgoing and outspoken, already a natural leader.

His grandmother, Pastor Carla Ceaser of From My Heart To Yours Family Worship Center in LaPlace, vividly remembers the day she absolved to put Cade’s fate in God’s hands.

As Carla sat in the waiting room the morning of Sept. 28, she had no idea her grandson was turning blue or that her daughter was hemorrhaging in the delivery room.

When Cade’s father Vernon Anderson approached her, she asked how the baby was, and he solemnly shook his head.

In the delivery room, the medical team had started running frantically without telling him much, making him fear he would have to choose between his wife and the baby.

Soon after, a nurse approached them and said, “I’m sorry, but the baby is not going to make it.”

“When something like this happens, you either accept it, or you decide your faith is stronger,” Carla said.

After doctors performed CPR and found a pulse, Carla called to Cade in the NICU and asked if he recognized her voice. When she asked him to live, Cade kicked his foot.

The first time Aurejana saw Cade, he was already in the incubator. A lot of her memories from Cade’s birth are hazy from the stress of the situation, but she will never forget her first contact with him, when he gripped her finger and held it tight.

Cade was diagnosed with moderate hyproxic ischeamic encephalotathy, a condition similar to cerebral palsy marked by seizures, blindness, lack of verbal and ambulatory functions and other symptoms associated with oxygen deprivation at birth.

Though Cade still has the diagnosis, he has no evidence of symptoms. Since leaving the hospital at one month old, he’s met every infant milestone without any significant delay.

Therapists are cutting back his early intervention services because he doesn’t appear to need them.

During annual check ups with health specialists, doctors are stumped by his unprecedented progress.

“He skewed all of their research,” Carla said. “Everything about him goes against what studies have proven.”

Aurejana said Cade has been a miracle since the very beginning of her pregnancy, when the gestational sac did not stick to the uterus, and she was told she’d most likely miscarry within two weeks.

“I believe that if it hadn’t have been for faith in God, it wouldn’t have turned out this way,” she said.

Vernon was a huge help in the first stressful months, sitting in the NICU all night as she recovered and taking family leave from work, Aurejana said.

All welcome at Night Out Against Crime