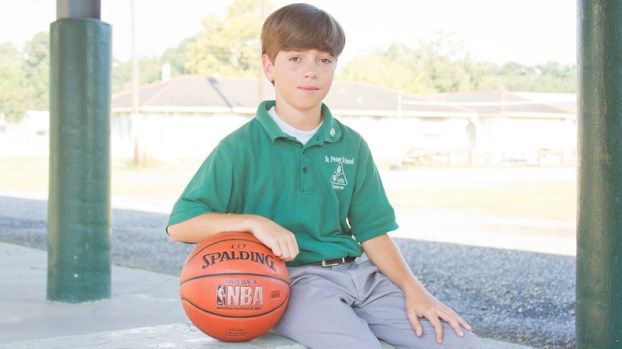 “He’s an altar server. He’s in Beta, sports, drama and everything we offer at St. Peter. He comes from a line of family members who are all very dedicated and still very active in our school, and you can see that family presence in this child.”

Brodey, the son of Scott and Missy Becnel of Reserve, said he strives to follow in the footsteps of his great grandfather, E.J. Aucoin.

“Mr. E.J. taught me all the stuff I know today,” Brodey said.

Most of Brodey’s school activities are done on a volunteer basis, according to administrative assistant Jane Clement.

He goes above and beyond as an altar server for his fellow students and St. Peter Catholic Church parishioners, volunteering time during the school week and on weekends and holidays.

“He’s the lead server on his team,” Clement said.

“His job is to make sure everyone does their part serving during the Mass.”

Brodey is also a leader in Student Council, where he serves as class president. Last year, as Student Council secretary, Brodey helped direct can food and clothing drives for local Knights of Columbus holiday services, including the annual senior citizen’s Christmas luncheon.

Brodey’s grandfather, Randy Aucoin, has prepared food for the luncheon for more than 30 years.

When it comes to leading through service, Brodey believes “it’s just the right thing to do.”

Brodey Becnel has earned a reputation as someone who goes above and beyond as an altar server for his fellow students and St. Peter Catholic Church parishioners.

Teachers have selected him for the prestigious Christian Value Award twice, according to Clement.

When he’s not at church or in class, Brodey enjoys athletics. He’s a member of the St. Peter baseball, football and basketball teams, though baseball is his personal favorite.

After playing a role in “Jungle Pan” last year, he’s looking forward to auditioning as Abu the Monkey in an upcoming production of Aladdin.

Suggest who should be the next “LOOKS BRIGHT” profile subject by emailing stephen.hemelt@lobservateur.com.

RESERVE — Haeden Wahden, a ninth grader at Riverside Academy and member at large, is the 4-H Member of the... read more