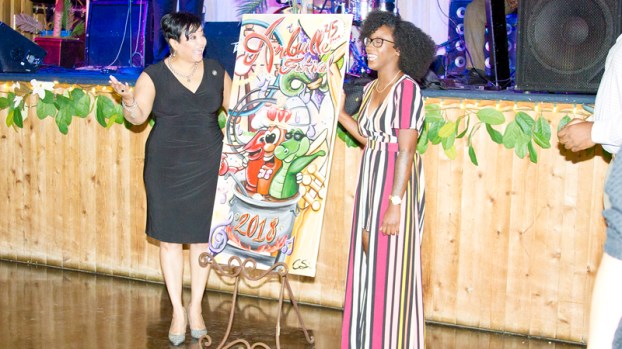 Natalie Robottom and Ciara Sanders are all smiles at the poster unveiling, which kicked off the 2018 Andouille Festival season.

To Sanders, the Andouille Festival represents carefree days racing around festival grounds with friends and indulging in favorite local foods.

Her painting focuses on three characters representative of the iconic Festival — Chef Charles the Crawfish, Gary the Gator and King Andouille himself — flanked beside each other in a boiling pot on a whimsical rollercoaster ride.

“When I first went to the Andouille Festival, I was a child, and those are my happiest memories,” Sanders said.

“This poster is reminiscent of that. Even though I didn’t do the rides because I’m not a big amusement park person, I know a lot of kids love it.”

Sanders wanted her design to capture every element of Andouille Festival culture, from the Ferris wheel to jazz music and gumbo cook-offs.

A graduating industrial design senior at the University of Louisiana at Lafayette, Sanders found a love for art at age 5 and enjoys painting commission pieces to help pay for school.

Her parents, Leonard and Bernadine Sanders of LaPlace, told her about the Andouille poster opportunity.

Parish President Natalie Robottom recalls working with Sanders’ mother in the early 2000s. She’s pleased to see the talented and intelligent young woman Sanders has grown up to be, and is thrilled to see a new addition to the iconic poster tradition.

“Under my tenure as (parish) president, we reintroduced the original festival poster and made it available to the public again,” Robottom said. “I felt it was an important part of the festival and its legacy. I’m proud that, since its re-inception, the artists have all been locally from St. John the Baptist Parish.”

Past Andouille Festival posters line the walls of the Parish administration building on Airline Highway in LaPlace, telling a visual history of how the event has grown and changed.

Starting in October, official posters can be purchased at Don’s Supermarket or Greg’s Neighborhood Market in Reserve or at Matherne’s Supermarket in LaPlace. Signed and numbered festival prints are being sold for $40 each, and signature only prints cost $30 each.

Posters will also be sold in the General Store at the Andouille Festival, which runs Oct. 19-21 next to the St. John the Baptist Parish Community Center on U.S. 51 in LaPlace.

Marathon has served as title sponsor for the Andouille Festival since 2015.