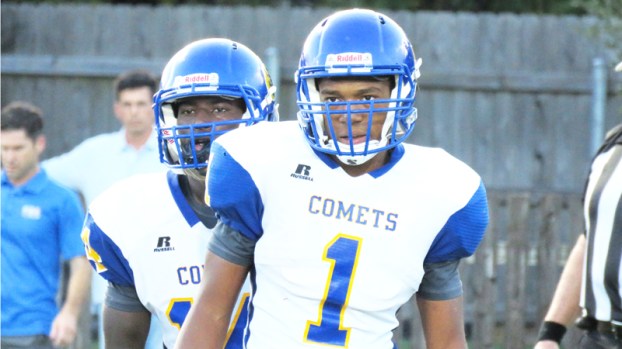 Taylor Miller, No. 14, and Justin Dumas, No. 1, look to the sideline for instruction during the Comets' game against Country Day in Metairie.

METAIRIE — The passing connection between quarterback Justin Dumas and wide receiver Taylor Miller was one of the few positive things going for the St. Charles Catholic offense Friday in Metairie.

Naturally, the Comets went back to it when they needed a drive to set up a possible game-winning field goal.

With less than 30 seconds remaining in SCC’s battle against Country Day, coaches called it up again, getting a completion inside the 30 yardline, but a hard tackle and tough luck fumble was quickly covered up by Christian Becnel, sealing the Cajuns’ 11-10 victory.

The frustration and disappointment was clear on all Comets’ coaches and players when the game ended. It wasn’t because they’re bad; it was because a winnable football game was lost.

Cajuns defenders Buckner Heebe and Christian Becnel get up to celebrate after recovering a fumble late in the fourth quarter.

St. Charles Catholic (2-2) led throughout the contest, going up early when Dumas connected with Miller on an 11-yard touchdown pass with 4:02 remaining in the first quarter.

The first half ended 7-0 in SCC’s favor and kicked up to 10-0, when senior Cameron Fabre connected on a 24-yard field goal with 7:43 left in the third quarter.

It was the first time all season Country Day went scoreless in a half.

Those remained the only points of the game until 4:47 to go in the fourth quarter, when Country Day (4-0) notched the scoreboard with a successful field goal of its own.

SCC failed to take much time off the clock on its ensuing possession, giving the ball quickly back to a hungry Cajuns offense led by playmaker Justin Ibieta.

The junior quickly connected on a 71-yard catch and run, setting up the pivotal (game-tying?) score with 2:05 remaining.

Instead of overtime, the Cajuns elected to go for a two-point conversation, which resulted in a successful conversion that was greatly aided by questionable calls on the SCC defense.

A misdirection Dumas-to-Joseph Chiarella pass got SCC cooking, followed by a Dumas scramble that was extended with a Cajuns late hit. Unfortunately for St. Charles Catholic fans, the unlucky turnover with only 21 seconds on the clock at the 21-yardline of Country Day ended a hard-fought game.

RESERVE — The Wildcats are heading to Raceland this Friday to challenge undefeated Central Lafourche (3-0). The record is impressive,... read more