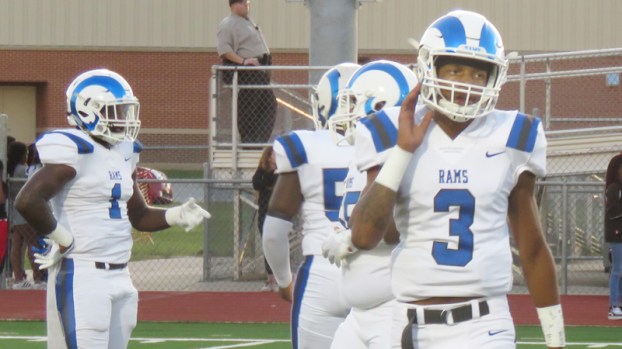 D’Andre Gaudia, No. 3, and his West St. John High teammates travel to Plaquemine this week.

Rams face off against powerful Plaquemine

Running back Melvin McClay leads a dominant Green Devils offense, which is averaging more than 37 points per game in 2018.

Plaquemine was humbled slightly last week, dropping a road game of it own, 59-28, at St. Thomas More.

That could make the Green Devils even hungrier when they welcome West St. John High (2-1) to Iberville Parish this week.

Despite last week’s loss, McClay was his usual productive self, running for 139 yards on 16 carries and producing a touchdown.

“We’re going to get their best shot,” West St. John coach Brandon Walters said. “They compete, and those guys over there are really athletic. We just have to be prepared for them.”

Local fans already know about Plaquemine’s talent, as it was just three weeks ago that the Green Devils traveled to Reserve and dusted East St. John High in the season opener, 42-20.

McClay rushed for three touchdowns and also hauled in a 16-yard scoring pass from Thomas as Plaquemine raced out to a 28-0 lead before a resurgent Wildcats squad made things tighter in the second half.

Thomas threw only one incompletion over eight attempts in that Aug. 31 contest.

The Rams are riding a two-game winning streak thanks in large part to the rushing talents of Kylan Duhe and Niko Roy, who grounded up 258 and 119 yards respectively last week in WSJH’s 40-20 victory over Bonnabel.

The Bruins scored 13 points early but were simply outclassed by West St. John High as the game played out.

“Two of their scores came early and then they scored one (late),” Rams coach Brandon Walters said. “We had some of our younger guys in late and they kind of let up. We can’t have that. We have to be able to finish.”

Rams quarterback D’Andre Gaudia passed for nearly 100 yards last week, and his effort included a 24-yard scoring run of his own.