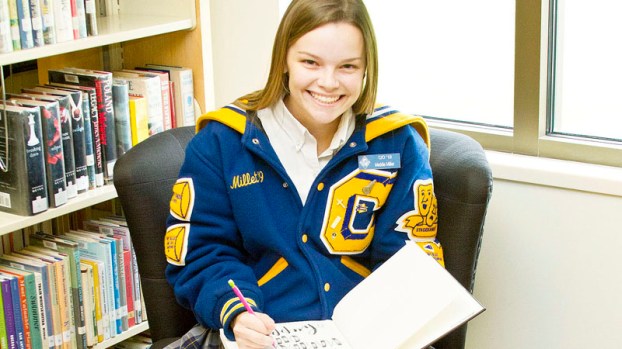 Madeleine learned that lesson growing up under gleaming theater lights. Her parents, Kevin and Greer Millet of LaPlace, fell in love on a stage and instilled a love of performance in their children.

While other families bonded over sporting events and sent their children to soccer tryouts, Greer brought Madeleine to rehearsals and children’s productions.

“Theater taught me it’s OK to be different,” Madeleine said. “Whenever you go to high school, people want to blend in and all be the same. It’s better to be yourself than to create an image for yourself to show other people.”

Madeleine denounces high school stereotypes, proving she can be a theater kid, a cheerleader, an artist and a school leader all in the same breath.

She’s an honor roll and National Honor Society student, serving consecutive terms as student council president. Madeleine is also president of Stagehands Drama Club, a group that has led her to roles in Seussical the Musical, High School Musical and Anchors Away.

In St. John Theatre’s The Wizard of Oz, Madeleine landed a leading role as Dorothy. Annie Get Your Gun, Cinderella and the Music Man are among the other productions she’s played a hand in.

Theater and cheerleading are the biggest time commitments on her schedule, but Madeleine said it’s possible to balance the two.

“Cheerleading is usually in the summer, going into the first part of the school year with games and competition,” Madeleine said.

“Theater is in the spring. Sometimes they overlap and I’ll have to split time between practice and rehearsal, but it usually works out.”

She trusts in God to guide her toward each goal and dedicates time to her faith as a Eucharistic minister and retreat team leader.

“I think God puts us on Earth for a reason, and we’re all searching for something,” Madeleine said. “I just have to keep working.”

Madeleine is still finding her calling, but she envisions herself opening her own boutique full of eclectic home goods and decorative prints.

She’s eyeing a college career at Louisiana State University, where she plans to major in business and minor in design. As social media manager for SCC, she’s building a foundation of public relations experience.

(July, 2016) Madeleine Millet prepares to work on a scene for St. John Theatre’s upcoming production, ‘The Wizard of Oz.’ Millet, who has grown up in and around
community theater production, stars as Dorothy.

A boutique wouldn’t be the first business venture for Madeleine; she currently sells commissioned art pieces and previously operated her own cupcake bakery.

“She’s very driven, independent and business savvy,” Denny said. “She’ll go above an beyond. Once we start an art project in class, she’ll work on it on her own time.”

Denny said Madeleine’s involvement in theater has made her empathetic toward other students and appreciative of each person’s contributions in art club.

She said Madeleine is a team player and well liked by her peers, evidenced by two Class Favorite awards and her spot on last year’s homecoming court.

RESERVE — A Saturday morning music video production that was supposed to be a close-knit affair quickly changed to a... read more