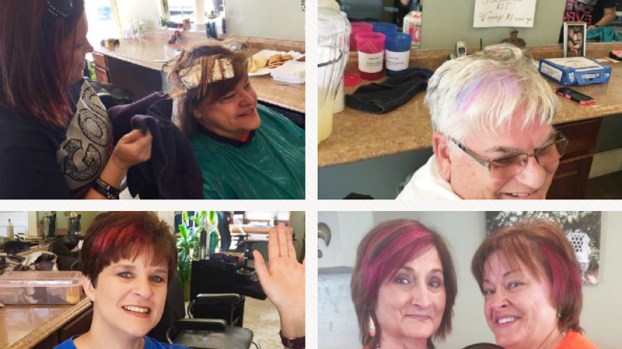 Jessica LeBouef has worked part time for six years with Judy’s Salon Central in St. John Parish, a job that puts her into contact with many people.

As a St. James Parish resident who grew up in Reserve, she has a connection to the River Parishes that runs deep.

It’s with that understanding, she told me this week, that she is looking forward to her shift from 10 a.m. to 2 p.m. Sept. 29 for the third annual “Pink Dat Day.”

“We have a breast cancer survivor, and her hair is growing back, so she’s going to come get some pink also,” Jessica said. “It’s a very special event. Even little kids love it.”

The pink strips are the key as patrons and supporters come by to receive strips of pink in their hair through permanent foils or temporary pink strips in honor of breast cancer awareness.

For the third year in a row, 100 percent of the proceeds are donated to River Region cancer support group, Perry’s Posse.

“They are $10 a strip, and if they get more than one, it could be anywhere between $15 and $20,” Jessica said. “It started out with just a few people coming, and they would put it on Facebook. More people would see it and it started getting more people’s attention. It’s a very fun day.

“I think Perry’s Posse is an amazing group. All glory goes to God. The time, effort and everything they put into raising money is a beautiful thing. I am very grateful to be able to help them raise more money.”

Jessica is deeply connected to the group through her mother-in-law Joan LeBouef, one of the Perry’s Posse leaders.

“It’s important to me,” Jessica said. “My mother-in-law had breast cancer and survived it, thank God. I just want to give back to her and Perry’s Posse for what they do. I thought it would be fun to do; it’s something people enjoy doing so we just do it every year.”

Jessica jokes that the day can definitely turn heart-felt, “especially with my mother-in-law, she is very emotional. She’ll shed tears for anybody’s story. A lot of people, if they haven’t been through it, know somebody who has been through it. It’s very fun and eventful. I look forward to doing it.”

Those interested in sporting pink in their hair Sept. 29 don’t need to make an appointment, just stop by Judy’s Salon Central at 191 Central Avenue in Reserve.

Jessica said the pink strip process goes by quickly and while one is processing, she can start another one.

Tanya Roccaforte of Garyville founded Perry’s Posse after her nephew and godson, Lawrence “Perry” Levet Jr., died from cancer in January 2014 at the age of 45.

Recognizing the emotional, spiritual and financial burden placed on the families of cancer patients, Perry requested his aunt start a charity to help others.

The organization has helped hundreds since its inception, and they currently donate to dozens of patients active in treatments.

Each patient in St. John, St. James and St. Charles receives a care package containing a check, a spiritual book and other trinkets.

The annual Andouille Festival presented by Marathon Petroleum Company, LP returns to the grounds of the Community Center in LaPlace... read more