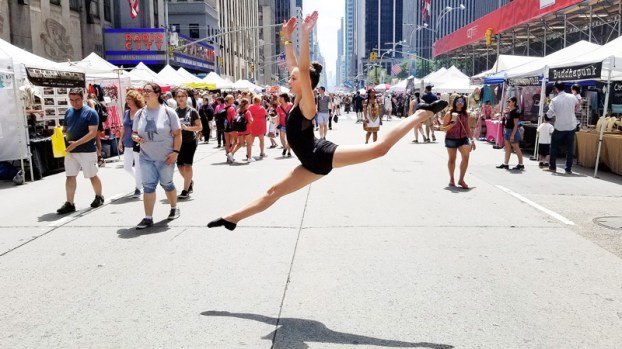 Isabel Pascual takes a leap during her summer visit to New York City, where she picked up instruction inside the famous Radio City Music Hall, pictured at left.

LAPLACE — Isabel Pascual, 13, forms an emotional connection with audiences each time she takes a contemporary dance solo to the stage.

Her performance of “Human” during the 2018 Aimee’s Dance Academy competition season linked lyrics to expressive movement and earned her the opportunity of a lifetime in New York City.

Judges selected the girls to attend the trip based on their stellar performances at regional competitions, according to studio owner Aimee Mulkey.

While Isabel wowed judges and received the Steve Bielecki Emotional Performance Award, Ainsley, 8, commanded the stage with her powerful contemporary rendition of “In the Air Tonight.”

Local dancers Isabel Pascual and Ainsley Mulkey recently completed a visit with the Rockettes, where they were introduced to kick line, tap and jazz techniques in classes held at Radio City Music Hall in New York City.

“When Ainsley gets on the stage, she turns into a beast,” Mulkey said.

“Both she and Izzy have ways to grab the audience. I think New York was such an amazing opportunity because it shows we’re producing great quality and challenging our girls.”

The Rockettes introduced approximately 100 participants to kick line, tap and jazz techniques, according to Isabel. The classes, held at Radio City Music Hall, concluded with a mock audition to expose young dancers to the industry.

Formed in 1925, The Rockettes are made of dancers 18 and older who kick up to 1,200 times a day during seasonal performances, held September through January.

Classes were also held at Broadway Dance Center and Dance Sport Studio, according to Mulkey.

Ainsley Mulkey and Isabel Pascual sit in front of their NYC view this summer.

Isabel was moved by stories of dancers who caught their big break working in large-scale musical theater productions such as The Lion King or Aladdin.

She sees a future in dance, whether it means owning a large studio in New Orleans or traveling the world to teach.

Isabel doesn’t remember life before dancing; it’s been part of her weekly routine since she was 2, and she thinks of her ADA competition team as family.

“With dance, there are so many different styles and ways you can present yourself,” Isabel said.

Ainsley is also powerful in the contemporary style, and she sees herself following in her mother’s footsteps as a studio owner.

She took her first dance class at 18 months old. Over the past year of competition, she’s taken home the region’s highest awards at Masquerade, Myla, Revolution and Imagine dance competitions.

“There’s something about dance that makes it fun,” Ainsley said. “It’s meeting new people and doing stuff you like, not like when you’re in school.”

While in NYC, Ainsley enjoyed sightseeing with Isabel during their down time. The duo visited Central Park, St. Patrick’s Cathedral, Madame Tussauds Wax Museum and other famous attractions.

“The dance classes were very fun, and we went to every candy shop in New York,” Ainsley said.

Isabel said the most humbling part of the trip was visiting the 9/11 memorial and seeing flowers beside the names of those who lost their lives.