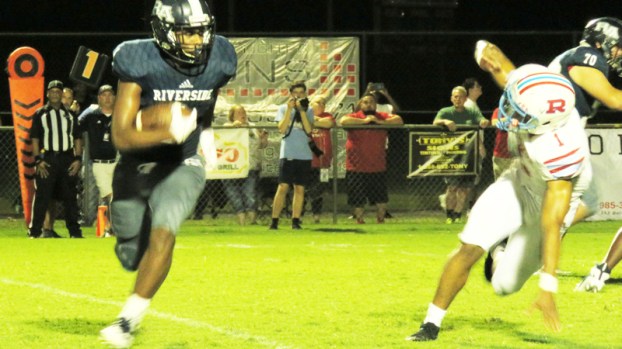 Riverside's Kash Foley, left, puts a Rummel defender on the ground on his way to a first quarter touchdown run.

RESERVE — Archbishop Rummel place kicker Patrick Vanderbrook may not have been perfect Friday night, but he was perfect when it counted.

With 9 seconds remaining and the Raiders all tied up with Riverside Academy, Vanderbrook kicked a 45-yard field goal to give Rummel a 37-34 victory in a game that was on its way to a rout but turned into a nail-biter.

Vanderbrook, who missed the first two games of the season with a hip injury, was 2-for-3 on extra points but one-for-one on game-winning field goals. When the Rummel coaching staff was asked what the youngster’s range was, they replied, “That’s it.”

The kick put the cap on a wild finish that saw Riverside Academy rally for a pair of touchdowns in the fourth quarter to tie the game in the final minutes at 34.

With 1:23 remaining, first-year Riverside quarterback Gage Larvadain threw a short pass to Tairyn Lockhart, who zigged and zagged his way through a weary Rummel defense for a 39-yard touchdown. Rebels kicker Colton Wilson, who had made four extra points, was smothered on the extra point attempt, however, leaving the score tied at 34.

But the Raiders needed just five plays to drive from their own 20 to the Rebels 29 with 9 seconds left to play.

That’s because the Raiders put their faith in another junior, running back Jaelen Sturgis. The 5-foot-9, 215-pound bull ran through Riverside’s defense for 219 yards and three touchdowns, plus he caught an 18-yard pass for another score.

It was one of only two completions for quarterback Chandler Fields, but he rushed for 118 yards and one touchdown. He also threw three interceptions, two of which were returned for touchdowns.

Ahmonte Watkins returned one 100 yards in the first quarter to give the Rebels their first lead, 7-6. Jaylen Watkins returned another 85 yards for a score in the final quarter, sparking Riverside’s comeback bid.

Rummel finished with 487 yards of offense and 29 first downs.

The Rebels did not move the ball nearly as well, rushing for only 132 yards. Larvadain was an adequate passer, though, throwing for 137 yards on 12 completions. Louis Cheneau and Kash Foley combined to rush for 106 yards with each scoring a touchdown.

Ahmonte Watkins catches his breath after returning an interception 100 yards for a touchdown.