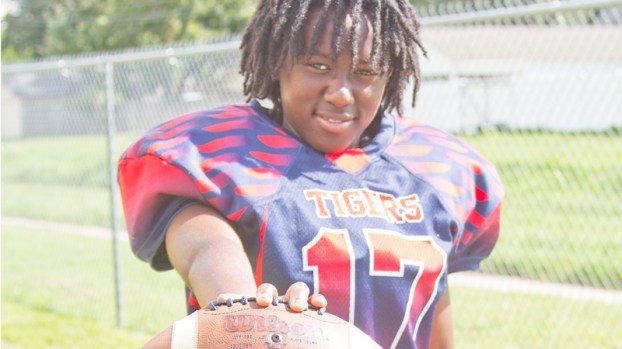 LAPLACE — When football coach Dustane Reed introduced his sixth grade P.E. class to flag football in the spring, one of the girls emerged as a dominating force, leaving no doubt she had prior experience.

Alyssia Paul, a newcomer to LaPlace Elementary, was the only girl able to control the ball and pull flags before most people knew what hit them.

Reed’s suspicions were confirmed when Alyssia, 12, told him she’s played organized tackle football at Kennedy Heights Park in Avondale since she was 5 years old.

It came as little surprise to Reed when Alyssia, now a seventh grader, recently became the first girl to make the football team in LaPlace Elementary School history.

Alyssia was skeptical until she saw her name on the roster, even though making the school team was always part of her plan.

“I’ve always played for parks, and I decided I wanted to start playing for the school instead, since the school has a football team,” Alyssia said. “Being the first girl to make the football team, I feel like I’ve inspired some people. All the girls at school were happy that I made it.”

Alyssia Paul and coach Dustane Reed are part of the LaPlace Elementary football team this year.

Alyssia finds the designation humbling, but notes the experience is nothing new. From a young age, she’s always been the only girl on the team, and she doesn’t feel she’s treated differently from the boys.

She’s not handled gently; hard-hitting contact is her favorite aspect of football.

Alyssia said her challenge is proving herself in desired positions. While Alyssia hoped to become a running back, she’s been given the most play at quarterback and free safety.

Reed said he finds Alyssia best suited to defense on LaPlace Elementary’s competitive team, adding her organized tackle experience has already set her a notch above her counterparts.

“Her skill set is pretty noticeable, and she’s actually a little more advanced than a majority of the kids I have on the team right now,” Reed said. “Around here, a lot of kids come out for football for the first time in sixth grade.

“Alyssia’s athleticism really stood out, and she understands what I’m talking about whenever I say something about the game.”

Alyssia’s love for football started by attending her older brother’s football games. She watched the boys run the field, thinking to herself that she could compete with the best of them.

“I would get on the sidelines and do the exercises with them, and one day, the coach asked my mom if I was going to try out,” Alyssia said.

Her brother, Quincy Jenkins, 14, is also a member of the LaPlace Elementary football team this year, and Alyssia said each football game will be a match of friendly sibling rivalry.