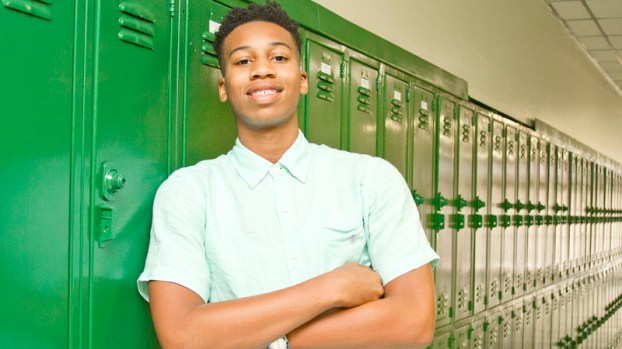 St. John the Baptist Parish STEM magnet program sophomore Christopher Taylor is growing as a journalist through an internship with JR Nola, which exposes students to print, photography, online and broadcast media opportunities. The LaPlace teenager is eyeing a career in sports reporting.

LAPLACE — Christopher Taylor of LaPlace has always loved how the contagious energy of sports draws total strangers to cheer, clap and cry together.

That instant connection, formed over something as simple as a monster dunk from Anthony Davis, fuels Christopher’s passion for sports journalism.

Currently a sophomore at the new St. John the Baptist Parish STEM Magnet program, Christopher aims to build communication skills and a multimedia repertoire for his dream job.

“I like to express my feelings and opinions of everything going on in the sports world through writing,” Christopher said.

“I’ve always enjoyed sports. I don’t want to play in the NBA or NFL, but I still want to be around the atmosphere and be in that environment. It’s pumped up hype all the time, especially in the city of New Orleans. You can scream together at each win and just enjoy life.”

Christopher sees himself as a sports commentator in the future, taking on the role Stephen A. Smith has filled in talk radio and television.

Thanks to a summer of working in the industry, Christopher Taylor is already a pro at the photography mainstay, “Rule of Thirds.”

For now, he’s sharpening his journalistic writing through an internship with JR Nola, a mentorship program that prepares local youth for careers in print, photography, online and broadcast media.

Throughout the spring, Christopher covered WWE Wrestlemania and the New Orleans Pelicans. He’s continuing the internship this year, having most recently covered New Orleans Saints preseason.

His stories and action photos are published at jrnola.org.

Christopher grew up playing recreation, AAU and school basketball. A two-time district-wide student of the year winner, he’s proved himself talented in academics and athletics.

He maintains a 4.0 GPA and has been an active member of BETA Club, 4-H and student council.

“I’m waiting for the school to add more clubs once they get everything together,” Christopher said. “Once we get rolling, we won’t be able to stop. I think the future of this school can touch the sky.”

She’s impressed with the knowledge he brought with him to the first day of class.

“We did a lesson working with audio in Audacity, and he already had one created,” Perry-English said.

“He knew how to do it. Christopher has been an excellent student for me. He’s a teacher helper and very outgoing with the other students. I called him into one of my larger classes to help assist me.”

Philip Smith teaches public speaking skills, and he said Christopher has a knack for eloquent speaking.

“He’s definitely one of the more vocal students, and I’ve been using him to lead by example and help out other students,” Smith said. “He has an ability to articulate his own understanding. He knows what he’s thinking and can effectively put it into words in writing and speaking.”

Christopher credits his academic drive to his parents, Terri and Enoch Frazier, who taught him self-motivation leads to success.