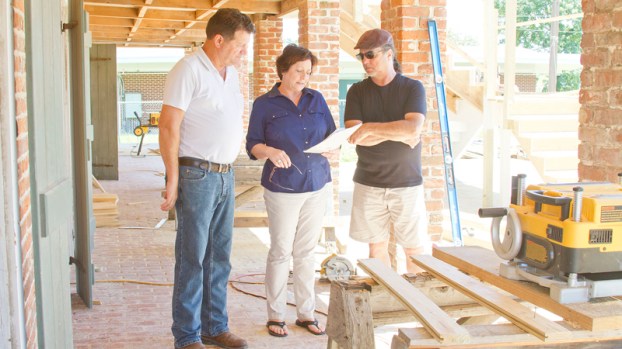 Stephen Guidry, Julia Remondet and Charles Daigle go over the plans at Godchaux-Reserve House, which is being painstakingly refurbished to match its former glory.

LAPLACE — Those with generations of family ties to Reserve remember sprawling sugarcane plantations and the old Godchaux Sugar Refinery as the town’s heartbeat.

Less than four years ago, the crumbling Godchaux-Reserve House looked like a remnant of a time long forgotten. The eighteenth century plantation house, moved from its site within the sugar refinery to River Road during a 1990s Port of South Louisiana expansion, was structurally unsound and decrepit.

The Godchaux-Reserve House Historical Society has worked tirelessly through donations and volunteer hours since 2014 to breathe life back into the house and revitalize Reserve.

Over the past four years, the Godchaux-Reserve House has received a re-stabilized frame, a new roof, a reconstructed staircase and a restored exterior.

Oct. 1 marks the completion of Phase One exterior restoration, according to Historical Society President Stephen Guidry.

A community celebration will be held at 10 a.m. Oct. 16 at the Godchaux-Reserve House, 1648 River Road in Reserve, giving residents an opportunity to admire the House’s re-stabilized frame, new roof, reconstructed staircase and restored exterior.

“We are very pleased with the support,” Guidry said. “It’s unbelievable the amount of fundraising we have done so far. It was more than I thought we could do, and it shows you how much people want the building to be restored.”

Refreshments will be provided at the Oct. 16 celebration, and Historical Society members and donors will recreate a historic photo from when President-elect William Howard Taft visited the Godchaux-Reserve House in 1909.

Taft, accompanied by more than 140 senators, congressman, governors and diplomats, docked a flotilla of riverboats on the way to New Orleans and made a speech from the House gallery.

President-elect William Howard Taft visited the Godchaux-Reserve House in 1909, and a recreation of the historic photo will take place Oct. 16.

The Historical Society aims to raise $200,000 by January for the continuation of the preservation project, Guidry said. Donations can be made online at godchauxhouse.com.

She said the long-term goal is to transform the Godchaux-Reserve House into a museum for daily history tours.

“Growing up in Reserve, we thought we were the town that had everything,” Remondet said. “We had a pool, playground, a fair, jobs, dance halls, a theater. We want to breathe the life back into Reserve, and I think it can be done.”

The Godchaux-Reserve House is seen during Phase One enhancements, through which the building was made structurally sound.

According to Remondet, Leon Godchaux was the “Sugar King of Louisiana” and a prime example of a good public neighbor who funded numerous recreational facilities.

The Godchaux-Reserve House was Godchaux’s first plantation. The structure, built in 1764, passed through a number of owners, including several prominent free people of color.

“It showed, even back then, all types of people could be successful,” Remondet said.

Historical Society member Charles Daigle said the House instills pride within St. John residents as a reminder of the humble beginnings he and countless others found through the Godchaux Sugar Refinery.

Guidry grew up growing sugarcane with his father, and his family once owned the plantation lands that lay beside the Godchaux-Reserve House.

“This will be for the community forever,” Guidry said. “It’s a community project, so we welcome anybody to stop by, ask questions, donate or volunteer.”

Det. Taylor’s kindness, skill leads to 30-year sentence for cruelty to a juvenile