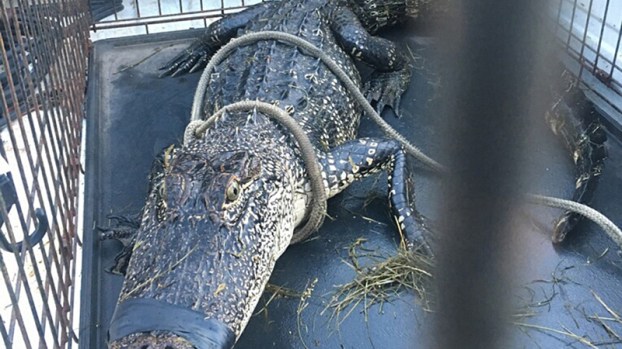 An alligator, above, measuring more than six feet long was recently pulled from a LaPlace park and relocated to a less densely populated area of the Mississippi River, authorities said.

They slip in through culverts connected to the swamp and typically pass through the park without issue during the spring and summer months.

Alligators that hang around for more than a week or two, such as the massive 6-foot-2 gator Dufrene captured in the Thomas F. Daley pond last week, pose more of a threat to areas frequented by local families.

St. John the Baptist Parish Sheriff’s Office personnel were on hand as Dufrene caught the gator with a fishing pole and prepared it for release near the Mississippi River.

“The alligator was 6-foot 2-inches, the same height as me,” Sheriff Mike Tregre said. “That’s pretty sizable. He was just sunning out there, but we can’t have that next to the kid’s park.”

SJSO first became aware of the alligator sightings near the end of August, according to Lieutenant Chip Wale. A lot of alligator nuisance calls that come in during warmer months involve 2- to 3-foot gators, which deputies typically corral and drive toward the swamp.

“When they get a little bigger where they can be dangerous, we contact nuisance control so they can handle it,” Wale said. “Alligators typically come and go when there isn’t a huge food source for them, but this just happened to be a 6-footer who stayed in the pond. It isn’t typical, but it happens.”

Dufrene, a Louisiana Wildlife and Fisheries contracted worker, was called out to the job. For the next week, he monitored the area periodically until he was able to spot and capture the gator.

The alligator was released safely to an isolated area of the river, Dufrene said. The fact that it wasn’t fed by humans at the park saved its life and possibly the lives of others, he said.

“It’s actually illegal to feed alligators,” Dufrene said. “Once alligators are fed, they become dependent on humans and start looking at them as a food source. We can’t release them at that point because it could lead to a bad situation.”

The rule of thumb when seeing an alligator, according to Dufrene, is to leave it alone and let it pass through.

If a large alligator sticks around residential areas, call the Louisiana Wildlife and Fisheries 24-hour hotline, 1-800-442-2511.

Dufrene said he isn’t fearful of alligators, no matter how large.

“It’s a service that’s needed, and I just enjoy doing it,” Dufrene said.

“My dad did it when I was a kid, and I was kind of reeled into it.”

Spiky green reptiles the sizes of large men don’t frighten him, but Dufrene said he isn’t willing to capture every creature that crawls out of the swamp.