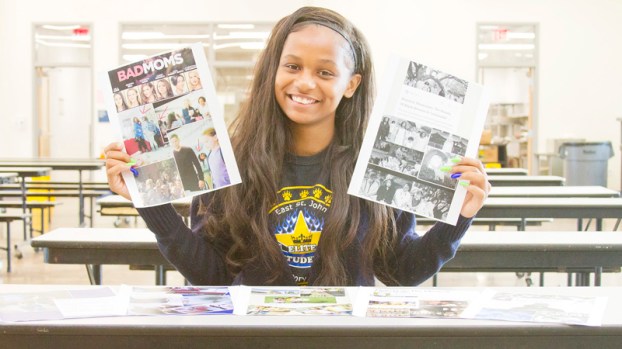 Amere Stewart holds up keepsakes of her burgeoning entertainment career at her day job — an eighth grader at East St. John Preparatory Academy.

LAPLACE — Amere Stewart of LaPlace can hop on a plane to a Hollywood audition one day and hang out with friends in the East St. John Preparatory Academy cafeteria the next.

At only 13 years old, Amere has already mastered the art of balancing student life with her ambitions within the entertainment industry.

She’s built an impressive resume including appearances in star-studded projects. In the music video for “All Night” by Beyoncé, Amere is seen holding Blue Ivy’s hand and seated next to Zendaya at a long table.

Amere was an extra in the 2016 film “Bad Moms” and visited Paramount Pictures in 2017 to audition for the role of Randall Pearson’s foster daughter, Deja, on NBC’s This Is Us.

Amere Stewart traveled to California in 2017 to audition for a role in NBC’s This Is Us.

“The first thing I do after I come home and study is think, ‘What can I do to better myself in this profession?’” Amere said. “Should I post to YouTube? Should I do a photo shoot? It’s a lot of responsibility, but I see myself being famous. I really do.”

Amere is a triple threat of talents, with years of experience singing, dancing and acting.

Singing came first, Amere said, citing music as a hobby that has been part of her life for as long as she can remember.

She learned to dance at The Greater New Plymouth Rock Church in Reserve, following in her mother’s footsteps.

“My mom was a liturgical dancer, so I came up dancing in the church since age 7,” Amere said. “Every Sunday, I dance and sing with the choir.”

Amere said God is the light of her life, and every path she travels is following His lead.

That path is looking bright.

She’s been blessed with the opportunity to appear in a photo shoot for NFL player Leonard Fournette’s apparel website, buganation.com.

Locally, Amere was cast in a commercial for Baton Rouge General Hospital and in two plays, “Hairspray: The Musical” and “A Love Like This.”

Each year, she dances on stage at the Andouille Festival in the children’s tent.

Through it all, Amere has remained an honor roll student and a role model to her peers.

“Being on honor roll plays a big part in anything I want to do,” Amere said. “You need to be educated to get through life.”

Amere Stewart, pictured at far right, appeared in Beyonce’s music video for “All Night,” a celebration of African American beauty.

“Amere is an all-around exceptional talent, academically and in her extracurricular activities,” Gayden-Gaines said.

“To see a student with her capabilities maintain a high scholastic record while going for auditions says a lot. She has the ‘It’ factor, but she always puts school first. She’s positive and high-spirited, and she knows what’s important. People look up to her.”

According to Gayden-Gaines, Amere was named Top Performing Student and Star Student, the two highest awards given out at school.

Amere represents her school as a student ambassador and has established herself as a vocal leader in choir.

She’s a member of East St. John Prep’s volleyball, basketball and softball teams and is captain of the dance team.

Gayden-Gaines said Amere’s extensive extracurriculars are linked to her family’s involvement at school.

Amere is the daughter of Titus and Rachel Stewart of LaPlace. She looks up to older sisters Aalaysha and Alexis.

LAPLACE — St. Charles Catholic started the 2018 football season with a hard-fought 14-7 home win over the much larger... read more