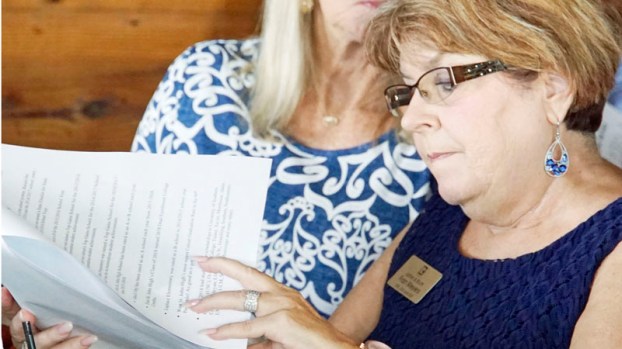 Local realtor Fran Meyers looks through information about the St. John the Baptist Parish Public School District during a luncheon hosted by the school district to involve the community in its schools.

“You can have the exact same performance you did before and your score will drop based on the changes,” St. John the Baptist Parish Public Schools Superintendent Kevin George said.

“That’s not just St. John the Baptist Parish, that’s districts across the state. They took the formula and applied it to current scores for schools across the state. Currently, there are 277 ‘A’ schools. When you apply the new formula there will only be 168.”

George said, according to district calculations, St. John Public Schools’ overall student performance has improved; however, the new score will not reflect it.

The School District released that information and George’s analysis Thursday as part of an effort promoting more community communication.

Local realtor Ched Edler discusses his own public school education during a quarterly meeting for realtors and pastors.

St. John the Baptist Parish School Board President Albert “Ali” Burl III said inviting a different segment in is another way to reach out to the community about what is happening in their schools.

“We thought this time we’d invite the realtors to keep them informed about what’s going on in the St. John the Baptist Parish School System,” Burl said.

“They are the first line of defense when someone is buying a house and asks what is going on in the school system, so we want to let them know what is going on so they can be more informed when speaking to potential buyers.”

Topics covered included the district’s improvement plan and highlights from the new school year, such as the opening of a STEM Magnet High School Program, where the St. John the Baptist Parish Public School District became the first school system in the state to offer pre-pharmacy.

“If you want to see another place that has some amazing things going on, go over there and ask the principal for a tour,” George said. “We’ve partnered with LSU, Xavier and the World War II Museum for its Robotics Program. Students leaving there can have credits in LSU’s engineering program or Xavier’s pre-pharmacy program.

Realtors and pastors also received information about changes to the grading system the Louisiana Department of Education uses to evaluate school districts that will lead to a decline in district performance scores across the state.

According to school officials, realtor Ched Edler closed the meeting last week by pointing to those gathered, such as himself, School Board member Patrick Sanders and District Attorney Bridget Dinvaut, as evidence that public schools work.

“We are all public school products, and I don’t think we did too bad for ourselves,” he said.