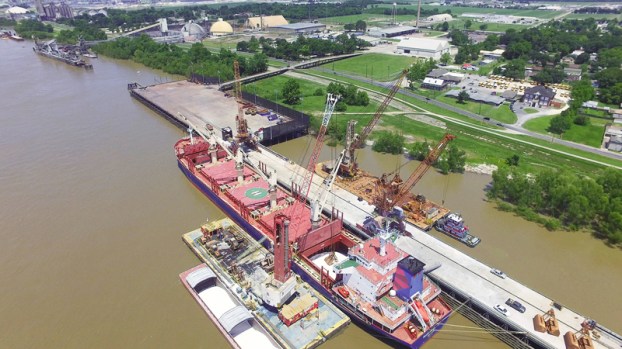 An aerial view of Port of South Louisiana’s Globalplex is seen in 2017.

The Mississippi River Ship Channel could be the first port complex on the Gulf Coast to reach a depth of 50 feet, now that the Director’s Report has been signed by the U.S. Army Corps of Engineers Director of Civil Works James C. Dalton.

According to Dalton, the project is “economically justified and environmentally sustainable.” The Port of South Louisiana, along with many elected officials, including Senators Cassidy and Kennedy, House Majority Whip Steve Scalise and Congressmen Richmond and Graves, and industry leaders have long worked to increase the channel’s depth to 50 feet, which is the same depth of the expanded Panama Canal.

The project will provide a draft of 50 feet from the Gulf of Mexico upriver 256 miles to the Port of Greater Baton Rouge. In addition, the material dredged from 30 miles of the project near the Mouth of the Mississippi River will be used to create an estimated 1,462 acres of new marsh habitat.

The federal share of the project would be $118.1 million, while the estimated non-federal share would be $39.4 million in accordance with cost sharing provisions of Section 101 of the Water Resources Development Act.

The current ship channel is maintained to 45 feet. USACE’s report identified the benefit-to-cost ratio at 7.2 to 1, calling the project one of national and international significance.

With his endorsement, Dalton recommends that Congress appropriate $237 million for the project in the 2019 fiscal year budget.

At the forefront of the dredging campaign has been Sean Duffy of Big River Coalition, who has been passionately diligent in his resolve.

“The Mississippi River Ship Channel deepening project has been a vital infrastructure project for the Big River Coalition since we revitalized the effort with our colleagues at the U.S. Army Corps of Engineers and the Louisiana Department of Transportation and Development in 2011,” says Duffy. “The multiple benefits include substantive transportation cost savings to the American farmers, job creation throughout the nation’s interior, and increased flood protection of businesses, farms and homes.”

The Lower Mississippi River is home to four of the nation’s Top 15 ports by annual tonnage (Port of South Louisiana, Port of New Orleans, Port of Greater Baton Rouge and Plaquemines Port, Harbor and Terminal District), moving more than 500 million tons of cargo, including 60 percent of the nation’s grain and is connected to 14,500 miles of inland navigable waterways.

Louisiana Governor Edwards lauded USACE’s endorsement, recognizing it as a “…truly great moment for Louisiana … as this project will help to make our world-renowned port system even more competitive, while creating opportunities for manufacturers, growers and producers who rely on our ports up and down the entire Mississippi River.”

This most vital project will ensure economic development, increase job opportunities (currently, one in five jobs in Louisiana is port-related) and provide material for land conservation for years to come.

It’s a win-win for Louisiana!

Keller: Be the role model your son needs

When speaking to parent groups, which include people convicted of a DWI, I often ask the fathers who have sons... read more