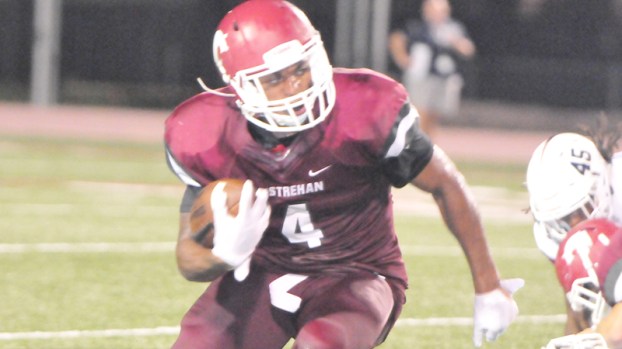 Destrehan running back John Emery, coming off 194 rushing yards and three touchdowns against Slidell, is going to be the chief challenge for the SCC Comets defense this week in St. Charles Parish.

LAPLACE — St. Charles Catholic started the 2018 football season with a hard-fought 14-7 home win over the much larger Chalmette Owls.

Unfortunately for Comets fans, the challenge only gets harder this week.

SCC faces off against another traditional 5A power, but this time it’s on the road and with a revenge-minded Destrehan High School.

A year ago, St. Charles Catholic hosted the Wildcats and won 24-8, despite being down its starting quarterback and best defensive player.

DHS players are sure to remember the 2017 battle, which ended up being Destrehan’s first regular season loss since 2012.

Destrehan brings back almost all of its offensive starters from last year’s team. This could be the best offensive football team head coach Stephen Robicheaux has had at Destrehan since 2007, and if it even finishes within shouting distance of that squad — an unbeaten state champion heralded as perhaps the greatest team in school history — the Wildcats could be a threat to reach the Superdome.

Running back John Emery’s recent commitment to Georgia was the culmination of a long recruiting process that saw numerous high-level Division I programs make their pitches. Emery wanted to make a decision before the season, so he could focus on his efforts at Destrehan.

Week 1 was a great indication that Emery is very focused on 2018.

He carried the ball 16 times for 194 yards and three touchdowns (two in the second half) of the Wildcats’ 42-15 victory over Slidell.

“He’s just versatile, fast, has great vision … he has all the characteristics of a really good running back,” Robicheaux told L’OBSERVATEUR before the season. “The greatest thing about John Emery is that if he walked into this locker room and someone didn’t already know him, you wouldn’t know who he was or that he’s such a major recruit. He’s just so laid back and even-keeled.”

The one thing that might be more dangerous than the Destrehan offense is DHS’ defense. The squad gave up two touchdowns in the first 10 minutes of Week 1, then clamped down, pitching a shutout the rest of the way while creating a turnover.

Despite the challenge, local football fans know never to count out SCC or coach Frank Monica.

The Comets faced a size and numbers disadvantage last week and still managed to create two rushing touchdowns while holding an opponent to single-digit scoring.

Teams that discount SCC’s ability to control the line of scrimmage on offense and defense rarely come out victorious.

This Friday in Destrehan promises to be another competitive classic.