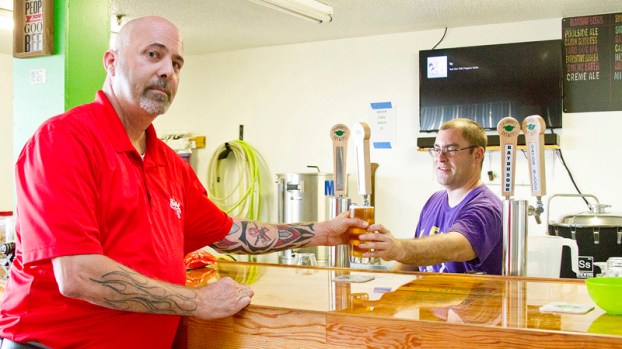 Stephen Adams of Baumer Foods grabs a beer this week from Jason Delatte, right, at Cajunboyz Brewery in Reserve.

RESERVE — Jason Delatte could stop to breathe a sigh of relief that his business, Cajunboyz Brewery, is finally open after more than a year of waiting on permits, but he has no intention of pausing the progress.

With help from business partners Tim Delatte and John Strickland, Jason is working tirelessly to ensure the new microbrewery, located at 114 Power Blvd. Suite 3 in Reserve, reaches its full potential.

Jason envisions Cajunboyz as a hub where people can congregate after work, kick back and enjoy a beer. He sees the community cheering during the big game, competing in dart competitions and gathering for movie nights and charity events.

A grand opening celebration is planned for Nov. 10, coinciding with Veterans Day as a tribute to Jason’s service in the U.S. Navy.

One of Jason’s old friends from the Navy encouraged him to open a business as his passion for home brewing started to take off.

“I started home brewing in 2013 and, like any hobby, started spending more money on it the more I got involved,” Jason said.

“My friend owns a brewery in Alabama, and I thought I’d give it a shot because there’s nothing like that in this area. I don’t know of many restaurants or bars that sell craft beer.”

There are currently 12 specialty beers on tap, ranging in taste from bright and crisp to toasted and nutty; dark and roasted; fruity and spicy; and sour and tart.

A pint of beer generally runs $4 to $5, depending on the flavor, Jason said.

The new microbrewery is located at 114 Power Blvd. Suite 3 in Reserve.

“Cajun Goddess” cream ale and the pineapple-infused “Poolside Ale” have been the top two requests, according to Jason.

“Talking with the customers about the beer has been the best part of starting the business,” Jason said. “From one end of the bar to the other, everyone talks to each other.”

The community will have more chances to come together during Wednesday movie nights and a car show planned for this fall, Jason said. The last car show, held in April, collected $900 for autism awareness, and Cajunboyz staff plans to raise funds for breast cancer awareness.

Jason’s father, Tim, hopes to see Cajunboyz expand to utilize nearby warehouse space in the future. He sees the specialty brews eventually being sold in local stores and restaurants. When Jason and Tim aren’t serving beer, they work next door at Baumer Foods.

“They have the heart to go the extra mile,” Adams said. “I want to see them succeed because they have a yearning for it. Even though they already work 40-plus hours a week, they dedicate their time to be here and run a business.”

RESERVE — The St. John the Baptist Parish Andouille Pageant Committee is seeking contestants for the 2018 Miss and Teen... read more