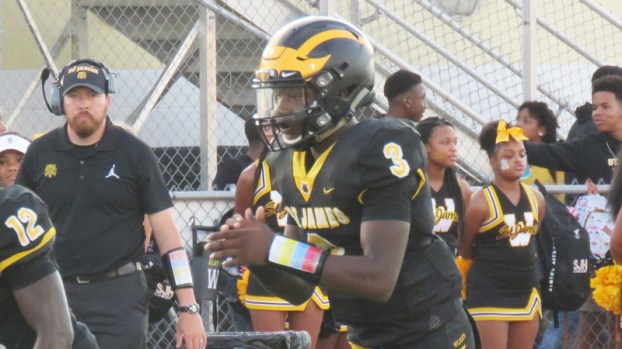 VACHERIE – Folks in the River Parishes call the annual season-opener between St. James and West St. John the Railroad Classic.

In the 23rd meeting of the two West Bank rivals, St. James rolled like a freight train.

The Wildcats forced turnovers on West St. John’s first two possessions, scored on five of their first six possessions and added a 70-yard interception return – all in the first half – on the way to a 43-0 victory.

A 40-yard field goal in the third quarter capped the scoring for St. James.

It was the third consecutive win for St. James and the seventh win for Wildcats head coach Robert Valdez, who used to coach at West St. John – and never lost.

Rams coach Brandon Walters speaks to his team before the game.

Wildcats coach Robert Valdez said he did not imagine this kind of win against the defending Class 1A state champion Rams.

“I didn’t,” he said. “We did have a great week of practice and, after last week – we didn’t have a great showing (in the jamboree against Assumption). We just had kids come out and give a great effort. The effort tonight was unbelievable. We’re just proud of how we came out. They’re a great football team. They’re going to win a lot of football games.”

Rams coach Brandon Walters was bowled over as well.

“Everything that could go wrong, went wrong,” he said. “I’d rather it happen now than later in the season, but this is horrible. No bones about it, this is not the way we play football.”

St. James starting quarterback Shamar Smith rushed for 151 yards and two touchdowns – one a 66-yard scamper — and completed one pass for a 21-yard touchdown to Shen Joseph.

Dontaz Sterling added a pair of rushing touchdowns and finished with 43 yards. Sean Leboeuf didn’t get in the endzone, but rushed for 93 yards on nine carries. The Wildcats also got a 40-yard field goal from Alec Mahler.

“We knew we were going to beat them,” Smith said. “We had a good game plan.”

West St. John quarterback D’andre Gaudia had a rougher night. He threw two interceptions, one of which was returned 70 yards for a touchdown by Arum Joseph.

Kylan Duhe made up the bulk of the Rams’ offense, rushing for 129 yards on 21 carries.

In other St. John the Baptist Parish football action, the Riverside Rebels football season did not start on a high note, as RA took to the road and came out on the losing end of a 36-13 final.

Things were more positive in LaPlace, where St. Charles Catholic pulled out a hard-fought 14-7 victory over Chalmette.

A Phillip Tran touchdown run, as well as a Justin Dumas scoring run accounted for the Comets’ scores.

In Reserve, East St. John High did not have quite the season opener the Wildcats’ new coaching staff desired, dropping the home game 42-20 to Plaquemine.

EDGARD — The season starts fast for the West St. John Rams, who travel to Vacherie Friday in a traditional... read more