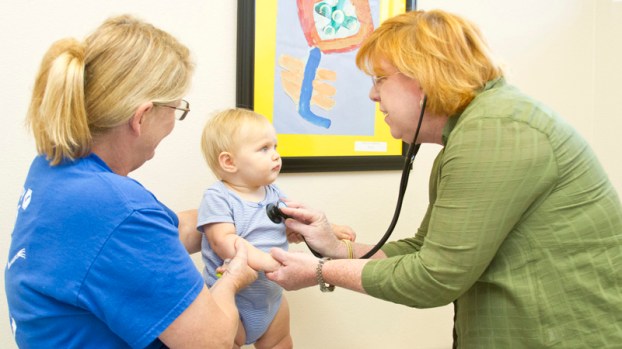 LAPLACE — Dr. Wendi De Frank has cared for countless children in St. John the Baptist Parish, in many cases seeing the babies she’s checked for head colds grow up and head off to college.

De Frank’s practice, Rainbow Pediatrics, has operated from Rue de Sante in LaPlace for 25 years, and time has taught her the best approach to pediatric care is a listening ear.

“When I first started my practice, I was young with no children,” De Frank said.

“I thought I knew everything, and then I found out how much I didn’t know. I’ve learned to listen to the patient and listen to the family. They will tell you what the real problem is. If you listen, you have a chance to help, even if it’s not always easy.”

Dr. Wendi De Frank stands in front of a board of patients’ pictures, newspaper clippings and graduation announcements.

In the early 1990s, De Frank heard River Parishes Hospital was requesting a pediatrician in LaPlace. A loan and a leap of faith marked a beginning of a practice that has spanned two generations.

The role of a pediatrician, according to De Frank, is often to ease parents’ worries by ensuring them their children are normal and healthy.

“Some of the children I used to see are now married with children,” De Frank said. “That is the most rewarding thing in my life, to know they remember me and trust me to take care of their babies.”

Dr. Nicole Jones has practiced alongside De Frank at Rainbow Pediatrics since November 2005, and she said the community appreciates their “old-school,” family-oriented approach to medicine.

“There’s little turnover in our staff, and we stand behind our service and excellent quality of medicine,” Jones said.

“We go beyond that by asking about their school and grades. For the maturing kids, teenagers going off to college, we transition into an adult peer mentor relationship.”

Jones said she listens to children’s career aspirations and years later reminds them of what they wanted to be when they were bright-eyed and bushy-tailed.

Jones has celebrated with special needs children who hit milestones at their own pace and grieved with families who lost a child to illness or accident.

Rainbow Pediatrics is located at 451 Rue de Sante in LaPlace.

De Frank said her first patient from 25 years ago visited the office on their anniversary this month, and she strives to remember all of the other faces who have come by since.

A board of patients’ pictures hangs inside the office, ranging from newspaper clippings of elementary honor school students to high school graduation announcements.

“Everything has changed over the years except for the patients,” De Frank said. “They’re still my babies.”

De Frank said she has no plans to change or expand in the future.

She loves the building she and her husband built in 2000, when Rainbow Pediatrics relocated to 451 Rue de Sante from across the street. Daily operations run smoothly, and the community support has been a blessing.

LAPLACE — René Phillips of LaPlace first picked up a chess set on a dare from his West Jefferson High... read more