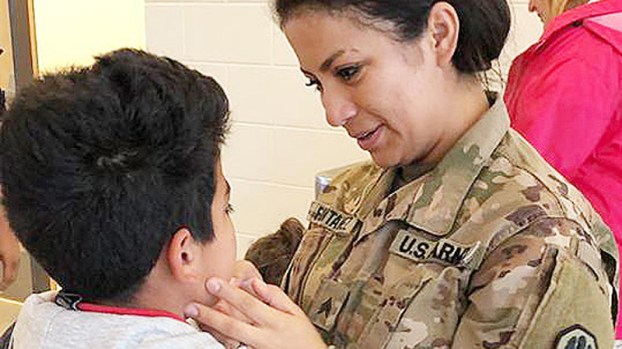 LAPLACE — Rafael Hernandez hugged his mother tightly on Thanksgiving Day 2017 as she bid her LaPlace home a temporary goodbye.

For the past nine months, Wendolin Fontanez has been stationed in Iraq with her Louisiana National Guard regional support unit, while Rafael, 9, stayed connected to her through phone calls and Facebook.

Rafael found comfort in his mother’s embrace at long last when the duo was reunited last week during a surprise homecoming in the LaPlace Elementary School cafeteria.

Tables packed with lively elementary students looked on as Wendolin, clad in military gear, stepped inside with her husband, Matthew Fontanez, and their 2-year-old daughter, Scarlett.

Within moments, Rafael had hopped out of his seat and crossed the cafeteria. Fighting back tears, he jumped into his mother’s arms and buried his head against her.

“My dad told me she would be coming soon,” Rafael said, though Wendolin’s visit to the school caught him completely by surprise.

“I was very, very happy,” Rafael said. “I felt very excited that she came home.”

In her 10 years of volunteer work at LaPlace Elementary, Rhonda Cammon has never seen a lunch period become so emotionally charged.

“After he went to his mother, there was cheering, and the whole cafeteria was in tears,” Cammon said. “They definitely uplifted the school.”

“It was overwhelming,” Wendolin said. “You go in thinking you know how it will go, and then in that moment you have all those feelings. It was an extremely joyous feeling to see him again and be back together.”

There was sadness mixed in with the bliss, Wendolin said. Holding her son in her arms and cupping his face, she was surprised by his height. Had he been nearly her size when she left?

It wasn’t the only reunion of the day. Earlier in the morning, Matthew and Scarlett welcomed her among a crowd of people, posters and American flags as more than 60 Louisiana National Guard soldiers returned home to Jackson Barracks in New Orleans.

The 139th regional support group, organized in 2006, journeyed to Iraq to provide security and intervention as part of Operation Inherent Resolve. Wendolin enlisted in the armed forces eight years ago, and she’s enjoyed providing human resources for the base.

“It can be hard, but it’s all worth it,” Wendolin said.

Matthew, also a military parent, returned home from his last deployment in 2013, and he hopes his family will have a long period of stability.

Even when they were separated, Matthew said he and the kids stayed strong knowing there was no other choice but to keep marching forward.

Rafael reflected on favorite memories of his mother each time he felt the distance between them.

Now that his family is whole, he’s enjoyed spending time with Wendolin and visiting their favorite hibachi restaurant.