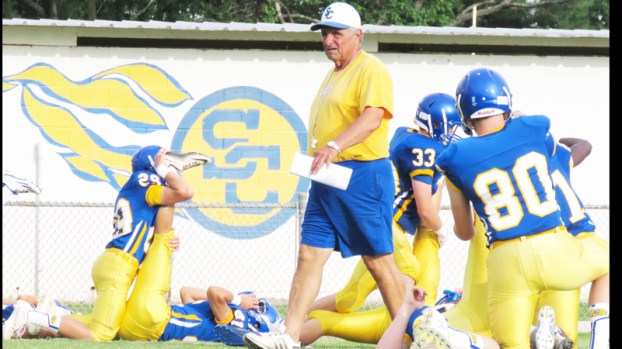 St. Charles Catholic coach Frank Monica said his team will have to mature quickly in 2018.

LAPLACE — Coach Frank Monica said his Comets snuck up a little bit on Chalmette last year in a season-opening victory, something he doesn’t expect to happen this year as SCC hosts the Week 1 affair.

“They have 24 seniors on the team,” Monica said. “They are a massive football team with two real good running backs. More importantly, they run the wing-T, which is a very rare offense with a lot of misdirection. They run it quite well. You have to train your kids in practice to hone in and have a laser focus.”

The Comets can take some momentum into the game following an 8-0, road win over Archbishop Hannan in last week’s jamboree.

St. Charles gained 96 yards of offense on the night, running for 56 yards and passing for 40 yards.

Coaches are looking for more consistency this week, noting the defense started slow against Hannan and finished strong, adding the offense started stronger then they finished.

“We were able to see our kids react with pressure on them,” Monica said. “We were pleased with the win, but we know we have a long way to go to take that next step.”

Chalmette boasts a strong defensive line that averages more than 260 pounds, according to Monica, who said his young offensive line has a major challenge ahead.

“(Chalmette) has no weak spots,” Monica said. “They will come in here with a big band and a lot of crowd noise, so the atmosphere is going to be electric. That is what our kids need to get used to. I’m looking for our team to mature quicker than normal.”

SCC takes to road for jamboree at Archbishop Hannan

LAPLACE — St. Charles Catholic coach Frank Monica said the Comets have a lot of weaknesses to strengthen during the... read more